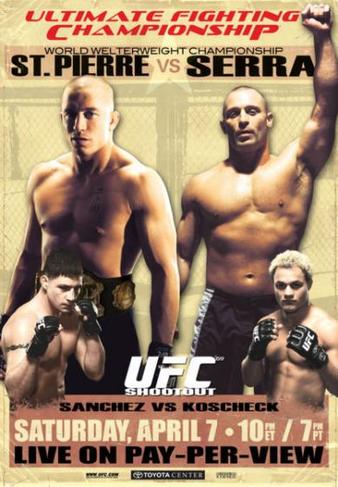 Despite winning the fourth season of The Ultimate Fighter, lightweight veteran Matt Serra was considered a sacrificial lamb being led to the slaughter in the runup to his title bid against Welterweight Champion Georges St-Pierre. St-Pierre, critics said, was too large, too powerful, and too good for Serra to do anything against. But just like that, 3:25 into the first round, Serra had secured the biggest win of his professional career and produced the single greatest upset in MMA history by finishing the Canadian fan favorite with strikes.

In main card action, Roger Huerta defeated Leonard Garcia in one of the best fights of the year, prompting Sport Illustrated to feature Huerta as the first MMA fighter to ever grace the cover of the popular magazine.