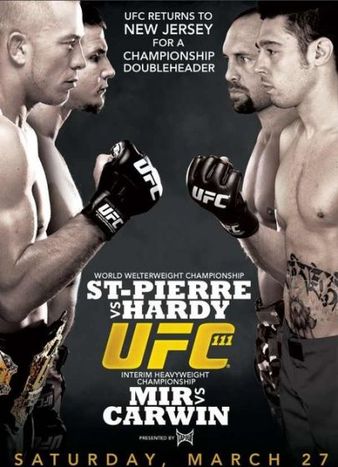 Tapology members can make predictions for upcoming MMA & Boxing fights. UFC 111 is closed for new predictions. 10 total members made predictions on this event, breaking down as follows below.

Leaderboard of the best predictions by member: UFC 111 Leaderboard

In a triumphant return to form for the UFC following some of the most dismal Pay Per View efforts in recent company history, UFC 111, featuring the Welterweight Championship fight between Georges St-Pierre and Dan Hardy, drew approximately 850,000 buys. Also featured was an Interim Heavyweight Championship fight between Shane Carwin and Frank Mir. St-Pierre defeated Hardy by Unanimous Decision, while Carwin made Mir his twelfth consecutive first-round knockout victim.

The main event fight between St-Pierre and Hardy marked the second time a UFC Primetime series was produced, which followed the two fighters in their training and personal lives leading up to the event. This was the first time a British fighter had challenged for a UFC belt.

Watch the full video preview for UFC 111: St-Pierre vs. Hardy.