Martin Kampmann defeats Thiago Alves via Submission at 4:12 of Round 3 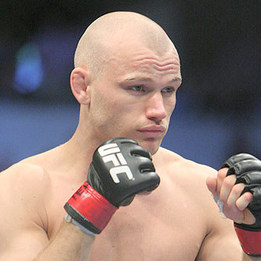 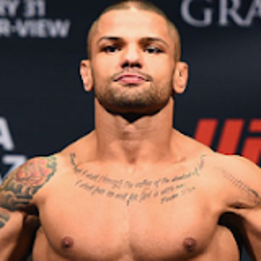 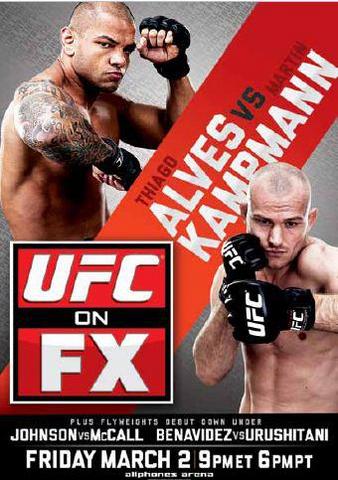 The main event of UFC on FX 2 featured Martin Kampmann taking on Thiago Alves in the welterweight division.

Alves connected first with a low kick and a right, followed up by another low kick. Kampmann pressed forward and grabbed a single leg working for a takedown, briefly pulling Alves down but losing control. Kampmann landed a brutal front kick to the jaw and sent Alves stumbling back. Kampmann came forward with a flurry but Alves remained composed and got back to his feet. Alves had a cut opened over his eye and went to his takedown game, bringing Kampmann down and passing to side control. Alves passed to full mount but initially was more focused on maintaining position than opening up with strikes. Kampmann escaped to his feet just before the round came to a close.

Kampmann pressed the action to begin the second round but Alves countered with some nice strikes including a big left hook. Alves connected on another left and then a good combination, prompting Kampmann to move in looking for a takedown. Alves defended the takedown and retook the center of the cage. Blood trickled from Kampmann's face as he ate a big right hand. Kampmann landed a nice combination capped off with a glancing knee to the head, but overall the second round appeared to favor Alves.

Alves clinched up early in the third but neither fighter could gain an advantage in the clinch. Alves threw shots at sometimes awkward angles but made up for it with his enormous power. Kampmann came forward with a nice knee midway through the round. Kampmann attempted another front kick to the head but missed and Alves landed a nice combination that stunned Kampmann. In a remarkable reversal, Alves dove in for a takedown and Kampmann tied on a guillotine choke. Kampmann moved to mount with the choke and forced the submission from Alves in a dramatic comeback.

The official end came at 4:12 of the third round for the winner, Martin Kampmann. Speaking with Jon Anik in the post-fight inteview, Kampman commented, "I was eating too many punches going into the clinch... I wasn't getting flowing as much as I wanted... I've got all the respect for Thiago, he's a beast... I felt I really had to finish the fight, so I thought I had a chance to go for a submission and I squeezed it... I'll fight anyone but Carlos Condit has got a target on his back... I'd love to get a chance to fight him."

5 days and 46 minutes
after

YOO check it out the new commercial for my sponsor @MyBlueGrace Training w/ Pitbull, @HypeOrDie and Michael Jarvi http://t.co/SFzgPame #UFC”

“@JavierBarbosaC: @ThiagoAlvesATT is there anything you scared off?” my mom 😳

A redhead tells her blonde stepsister, "I slept with a Brazilian...." The blonde replies, "Oh my God! You slut! How many is a brazilian?" 😜

Hope u guys had a blessed weekend. Thanks to all my fans for the support! Love u guys with all my heart... Our mission just got start it!

Home sweet home! Be grateful for what u have people. Life is awesome! @TheDolceDiet hope u got home to @BrandyDolce safe! #chocolatewasted!!

I'm thinking or a rematch or Diego Sanches. What u guys think? @ufc

2 days and 51 minutes
after

Finally land in the USA is good to be home. Don't feel like a loss at all this cause I learn from it. Now on to the next one. @ufc I'm ready

There are only two options regarding commitment; you're either in or you're out. There's no such thing as life in-between. -Pat Riley

@LiLHeathenMMA thanks a lot brother looking forward for your next fight!!!

“@akaSkrypno: @ThiagoAlvesATT Great to see you taking life for exactly what is man! You're already a champion in my book.” the warriors way!

Good thing about losing. U see all the haters come out lol #itwontchangeathing #hatersgotnolife

“@jeremiahlucero1: @ThiagoAlvesATT thanks for a great fight yesterday. Cant wait for the next one. U will be back stronger” Osu!

I'm gonna fuck up this buffet down here at the hotel now haha!!!

23 hours and 7 minutes
after

23 hours and 5 minutes
after

23 hours and 2 minutes
after

Don't ever give up on your dreams in situations like this is when u turn it up and push harder!!! That's how champions are made! Love u all!

My night but next time will be. Because #skyisthelimit and " I can do everything thru God the gives me strength" nothing can break me....

Some people the road is longer and a lot harder but I'm build strong and nothing will break me! And I'm gonna grind it until I get it wasn't

I can't thank enough all of you for those kind messages of support! I know I'm destiny to be a champion and God he's bigger plans for me....

Thanks to my sponsors @jacoclothing @MyBlueGrace! U guys are the best!

12 hours and 8 minutes
after

I'm just getting start it! I'm learning so much with all this! #skyisthelimit attitude. Now on to the next one!!

9 hours and 55 minutes
after

Living and learning..... Next time it won't happen again! Thank all of u for the support thanks to @TheDolceDiet and @AmericanTopTeam @ufc

9 hours and 10 minutes
after

And remember "We're all capable if we have faith and passion." - Yanni

Only 5 pounds over a day before the weight ins. I love u coach @TheDolceDiet I couldn't do this without u! Osu!!! #onamission #killthemall

“@jucao: Hey @Jonnybones check this video out you in Braziian Chanel http://t.co/lrurnCbA” lol that was awesome.

“@FadezBarbershop: @ThiagoAlvesATT come through and we'll look after you before the big fight.” can't come thru but I'll pay u to come over

“@amijames: @ThiagoAlvesATT wish my little brotha all the best for this Friday fight .bring home the knockout #ATTforlife” love u brotha!

Woke up just 12lbs over weight never been this easy! God Bless my team of coaches @AmericanTopTeam and the legend @TheDolceDiet! #Killmode

“@Shannon_Clare: @ThiagoAlvesATT it's a great story about never giving up! Jus like you buddy! Good luck on Saturday! :)” thank you!

“@jeremiahlucero1: @ThiagoAlvesATT whats up thiago? Can't wait for your fight. God be with you” with u also. Osu!

“@billydecola: @ThiagoAlvesATT what up boss man! I'll be cheering for you homie! Not for the hair cut... for the fight!!” lol thanks brotha!

Lmao okay okay I mess up with the "air cut" I'm cutting weight people give me a discount! #judgingthebrazilian

Anyone recommend a good place to get a air cut?

“@NinjaCisco: @ThiagoAlvesATT I'm ready for your fight!!!!” you me both! 😜

“@Texas_Girl84: Just heard Bisbing won most attractive UFC fighter, what?! Everyone knows @ThiagoAlvesATT is the sexiest man in MMA” 😜👍

“@themitchallan: @ThiagoAlvesATT how you liking the sun here in oz pitbull?” love it bro!

6 days and 44 minutes
before

6 days and 50 minutes
before

6 days and 58 minutes
before

I had to delete words with friends I got too many request my phone froze lol thanks for the requests guys I appreciate the love!

1 week and 3 minutes
before

Great day in beautiful Sydney got a chance to check it out Bondi beach with coaches @TheDolceDiet and @katelkubis. Awesome place!

Gonna try to sleep now god bless u all!

“@rblostpoet: @ThiagoAlvesATT do u like flying pitbull?” not my favorite thing to do but for a fight.... Fuck yeah!!!

“@RyanLoco: @ThiagoAlvesATT @AriannyCeleste I should shoot you and her together :) Let's make this happen” I'm game brotha

“@slinky07: @ThiagoAlvesATT what part of Australia will you be in” Sidney

“@SarahBethRoxx: @ThiagoAlvesATT heading back to the states I take it?” nop going to Australia we got just 20hours to go lol

It's official first photo shoot for @jacoclothing! Very proud to represent the brand! @glennauthentic thanks a lot! http://t.co/93zXEBDw