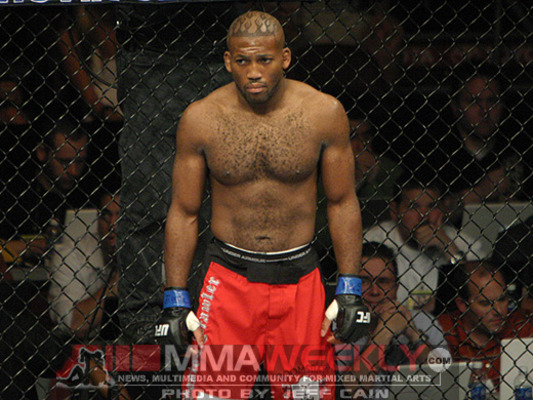 John “Doomsday” Howard, who got his nickname from the infamous villain responsible for killing Superman, is an American welterweight fighter currently signed to the UFC. He is an explosive fighter with knockout power in both hands and an underrated submission game. He is a Brazilian Jui Jitsu purple belt and trains out of Wai Kru in his hometown of Boston, Massachusetts. He has notable wins over Charlie Brennaman, Chris Wislon, Tamdan McCrory, Dennis Hallman, Daniel Roberts, and Uriah Hall. John has fought for promotions such as Ring of Combat, IFL, and CES. He was the Ring of Combat welterweight champion and the CES middleweight champion which he defended four times. Of his twenty two wins, fifteen have been finishes including nine T/KOs. He has won the UFC "Fight of the Night" and "Knockout of the Night" bonuses one time each.

Howard is also known for his long-standing grudge with former UFC welterweight Anthony “Rumble” Johnson after the two were rumored to be facing one another on two separate occasions. However, since "Rumble" is no longer in the UFC or in the welterweight division, it is unlikely the fight will ever happen.

John began his professional career in 2004. He would stay undefeated for through the first twenty three months of competition. In 2007, he would take on future UFC fighter, Nick Cantone, but would lose by decision. He would win a pair of fights in the next two months before taking on another future UFC fighter, Dan Miller, who he lost to by another decision at Ring of Combat 17. This sent his six fight record to 2-4 with an overall record of 7-4. He would pick up a win at ROC 18 and would decide to drop to welterweight when he debuted with the IFL in 2008. Later that year, he would return to Ring of Combat at ROC 21. He was matched up with future UFC fighter, Charlie Brenneman, for the welterweight title and was able to walk away with a decision victory.

Howard was signed by the UFC in late 2008 and made his debut against Chris Wilson at UFC 94 where he was able to walk away with a split decision win which earned both fighters the "Fight of the Night" bonus. He was able to follow it up with another split decision win over his former training partner, Tamdan McCrory, at UFC 101. He was paired up with Dennis Hallman at The Ultimate Fighter 10 Finale. Although he was losing the grappling exchanges throughout the fight, he was able to come from behind and pick up a knockout with only five seconds left in the fight. He was able to follow this up with a knockout in just two minutes against Daniel Roberts at UFC on Versus 1 which earned him "Knockout of the Night". Howard would begin to falter in late 2010. He would lose to future title contender, Jake Ellenburger, in August and would drop consecutive decisions to Thiago Alves and Matt Brown which would lead to his release from the promotion.

Upon his release from the UFC, Howard began fighting on the regional circuit again. He was able to pick up a decision win in Florida before signing with Classic Entertainment and Sports MMA in 2012. He would pick up the middleweight title in his first fight with the company. He would defend his title two more times, both via TKO, before taking a fight in Brazil which he would lose by decision. He would return to CES and picked up two more KO wins by the middle of 2013. This sent his record to 5-0 with the company in his fourteen months with them.

In 2013, John was petitioning the UFC to bring him back so that he could represent his hometown and honor the victims of the Boston Bombings when the company returned to the city for UFC Fight Night 26. Although he was initially denied, he was given a spot as a late replacement against highly touted prospect, Uriah Hall. Although he was a 4-1 underdog going into the fight, he was able to keep up with the knockout artist and picked up a split decision win. Even though he was only contracted for one fight, the UFC extended his contract due to his win over Hall. He next fought Siyar Bahadurzada at UFC 168 and was able to pick up a unanimous decision win. This notched his overall UFC record to 6-3.