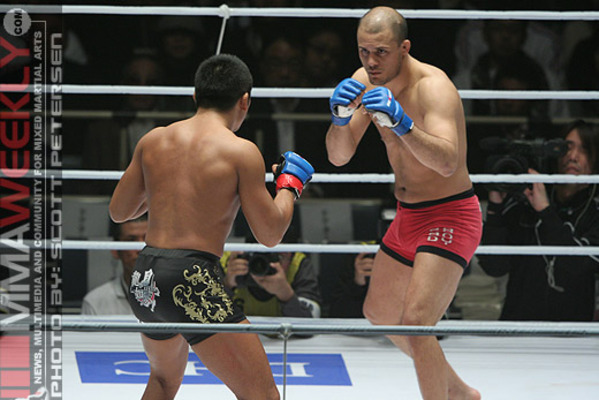 Fighting for a major organization has made Siyar Bahadurzada ineligible for regional rankings.

Siyar Bahadurzada is an Afghan welterweight fighter currently signed to the UFC. He trains out of the Blackzillians camp in Boca Raton, Florida. He has notable wins over Evangelista Santos, John Alessio, and Paulo Thiago. He has previously fought for Sengoku and Shooto where he is a two time defending middleweight champion. Of his twenty one wins, seventeen have been finishes including eleven T/KOs. He has won the UFC "Knockout of the Night" award one time.

Bahadurzada began his MMA career in 2002 by quickly knocking out his opponent. Over five years, he would compile an 11-2-1 record in various promotions throughout the Netherlands. He would then work his way up the ranks in the Shooto promotion, earning a title shot against Shiko Yamashita at Shooto 4 where he would win a unanimous decision to claim the middleweight title. In 2008, he entered the Sengoku Middleweight Grandprix. He defeated Evangelista Santos in the opening round by TKO but would lose in the semi-finals by heel hook to Jorge Santiago. Siyar would defend his Shooto belt twice before entering the welterweight tournament for United Glory. With TKO's over Derrick Noble and John Alessio, he would advance to the tournament finals where he defeated Tommy Depret to win the tournament.

Siyar would become the first Afghan signed to the UFC when he was picked up by the promotion in early 2012. He was matched up against Paulo Thiago in his debut. Siyar didn't disappoint, pulling off the upset with a first round knockout which earned him "Knockout of the Night" honors. Hand injuries, which forced him from a fight with Chris Clements at UFC 149, kept him out of action for almost a year before he would face off against Dong Hyun Kim. He was outmatched in the grappling department and Kim was able to cruise to a unanimous decision victory, handing Siyar his first loss in the UFC. He was scheduled to fight Robbie Lawler, but another injury forced him from the fight. Siyar would lose a unanimous decision when he faced John Howard at UFC 168. This marked the first two fight losing streak of his career and put his UFC career in jeopardy.