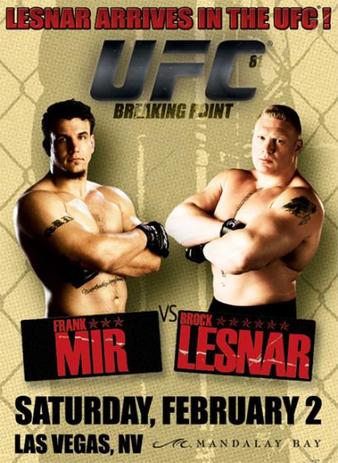 #64
Greatest Event of All Time

After the dismal Pay Per View effort of UFC 80 to kick off 2008, the UFC bounced back big with UFC 81, which featured an Interim Heavyweight Championship fight between Antonio Rodrigo Nogueira and the much-hyped UFC debut of WWE import Brock Lesnar, drawing 600,000 buys.

Nogueira, in typical Nogueira fashion, came back after losing the first two rounds to submit Tim Sylvia in the third with a Guillotine Choke, while Lesnar—although he started out strong—succumbed to a Heel Hook courtesy of Frank Mir in the first round. The title fight between Sylvia and Nogueira was put together because Randy Couture—the Heavyweight Champion—would not defend his title against Nogueira, as he was in the midst of a contract dispute with the UFC.