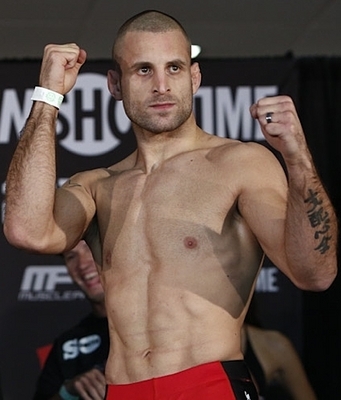 Tarec Saffiedine is ineligible for regional rankings due to inactivity.
Fighters must have at least one completed MMA bout in the past two years to be ranked.

Belgian born Tarec 'Sponge' Saffiedine is a well rounded welterweight currently contracted to the UFC. Before he signed with the California based promotion, he had fought for Shooto and Dream as well. He is of Lebanese decent. He has a blue belt in Brazilian Jiu Jitsu and a black belt in Shihaishinkai Karate. He currently trains at Team Quest in Temecula, California. He also has an amateur kickboxing record of 12-1-1.

He won his Strikeforce debut against James Terry by decision. He would win his next two fights against Nate Moore and Brock Larson, defeating both with relative ease. He next stepped up against the then undefeated Tyron Woodley at 'Strikeforce: Challengers 13'. This fight taught a lesson to Saffiedine, as 'T-Wood' would out wrestle him en route to a decision victory. All of his losses up to this point have been via decision.

Tarec has not lost since losing to Woodley, having won three straight fights by decision. In his current run, he took out Scott Smith, Tyler Stinson, and Roger Bowling. He next fought Nate Marquardt for the Strikeforce Welterweight title at the promotion's last event. Marquardt's most recent victory had been over Tyrone Woodley, Saffiedine's last loss. Tarec was able to control the entire fight and repeatedly peppered Nate with let kicks to the point where his leg was visibly swollen and discolored by the end of the fight. Tarec was able to win the fight by decision to become the final Strikeforce Welterweight champion and likely secured himself a spot on the UFC roster.

It was announced shortly after the final Strikeforce event that Saffiedine would be amongst the promotion's former fighters brought over to the UFC.

Saffiedine was expected to face Jake Ellenberger on 4 January 2014 at UFC Fight Night 34 .However, in late November, Ellenberger pulled out of the bout citing a hamstring injury and was replaced by Hyun Gyu Lim.Saffiedine won via unanimous decision. The win also earned Saffiedine his first Fight of the Night bonus award.

A fight with Jake Ellenberger was rebooked for UFC 172. However, Saffiedine had to pull out of the fight due to an undisclosed injury suffered in training.

Saffiedine faced Rory MacDonald on 4 October 2014 at UFC Fight Night: MacDonald vs. Saffiedine. After being out-struck the first two rounds, Saffiedine was finished for the first time in his career via TKO in the third round, as he was dropped by an uppercut and follow up punches leading to the stoppage.

A bout with Matt Brown was expected to take place on 14 February 2015 at UFC Fight Night 60. However, it was announced on 1 January 2015 that Saffiedine had pulled out of the bout, citing a groin injury.

After an extended hiatus spent rehabbing a litany of injuries, Saffiedine returned to face Jake Ellenberger on 30 January 2016 at UFC on Fox 18. He won the fight by unanimous decision.

Saffiedine faced Rick Story on 29 May 2016 at UFC Fight Night 88. He lost the fight by unanimous decision.

A pairing with Matt Brown was rescheduled, and was expected to take place on 30 December 2016 at UFC 207. However, Brown was pulled from the fight on November 11 in favor of a matchup with Donald Cerrone three weeks earlier at UFC 206. Saffiedine instead faced Dong Hyun Kim.  Kim was awarded a split decision victory.