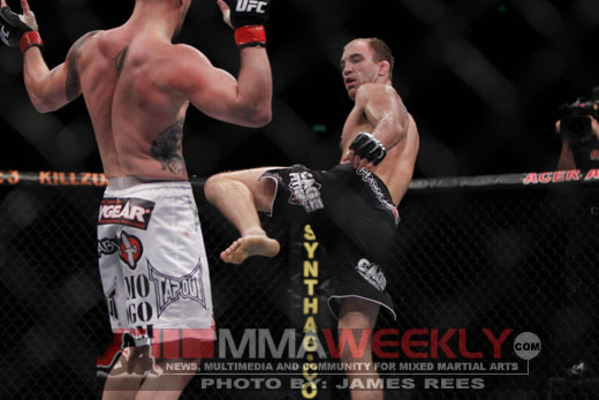 Brian Ebersole is ineligible for regional rankings due to inactivity.
Fighters must have at least one completed MMA bout in the past two years to be ranked.

Brian Ebersole has been in the fight game for quite some time.He has racked up 67 pro fights as of July 2012,Winning 50 of those.He is widely known for his signature "cartwheel kick" which he scored a knockout with landing him in tons of MMA highlights around the world.He also gained some popularity for his "hairrow" an arrow he shaves into his chest hair before fights to show his opponents where his chin is,Having never been finished by strikes in 67 professional fights.He has a very unique Muay Thai style which throws many opponents off guard having never seen anything like it.He is no slouch on the ground either,His submissions escapes are very impressive.He is one of the hardest guys to choke in MMA.He has actually gone so far as to say "The guillotine is a myth" due to him getting caught in it and escaping it over and over while never going to sleep.In his recent fights he has been caught in many tight chokes and has worked his way out with relative ease.He normally trains at Tiger Muay Thai in Phuket,Thailand and ESS Performance in Melbourne,Australia.Despite being American born he calls the world his home,Having traveled all over it training and teaching.