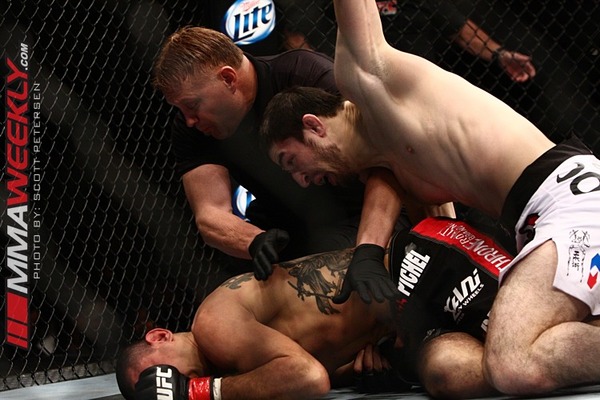 Fighting for a major organization has made Rustam Khabilov ineligible for regional rankings.

Rustam Khabilov is a Russian lightweight fighter currently signed to the UFC. He is a Combat Sambo World Champion (2007), Combat Sambo Russian National Champion and a four time Combat Sambo Republic of Dagestan Champion. He trains out of Legion Sport Club in Russia and Jackson's MMA in New Mexico. Of his seventeen wins, nine have been finishes including five submissions. All but one of his finishes have been in the first round and he has never been finished. Khabilov is one of eight fighters in UFC history to earn a knockout stemming from a slam takedown. He has earned the "Fight of the Night" bonus one time.

Khabilov fought mostly for M1-Global and had a 11-0 record before losing his first fight by a Split Decision. He would win his next three fights before being signed to the UFC. Khabilov looked impressive in his UFC debut defeating Vinc Pichel with suplex's and punches to get the TKO finish. Khabilov would finish his next fight by TKO as well when he faced Yancy Medeiros at UFC 159. He would once again use his suplex however this time when he slammed Medeiros down it caused him to break his thumb. Upon noticing it, Medeiros showed it to the referee and they had to call the fight off because he was unable to continue, declaring Rustam the winner by TKO. He fought Jorge Masvidal at UFC: Fight for the Troops 3 and was able to pick up the unanimous decision win. This win would extend his win streak to eight and would earn him the "Fight of the Night" bonus. Khabilovs next fight would be against Ben Henderson at Fight Night 42 which he went on to loose by fourth round submission. His next fight also went the way of his opponent as he lost a split decision against Adriano Martins. With his position in the top 15 now in jeproady it was clear that changes needed to be made which is exactly what happened as Khabilov is now riding a four fight win streak over Norman Parke (unanimous decision), Chris Wade (unanimous decision), Leandro Silva (unanimous decision) & Jason Saggo (unanimous decision).