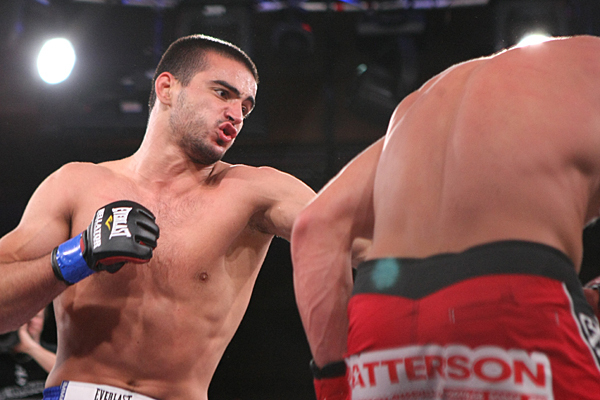 Fighting for a major organization has made Andrey Koreshkov ineligible for regional rankings.

Koreshkov made his professional mixed martial arts (MMA) debut in October 2010. He initially competed exclusively in his native Russia and compiled an undefeated record of 8-0 (five technical knockouts, three submissions) with none of his fights going to a decision. The MMA news site Bloody Elbow listed Koreshkov as the top welterweight prospect in their 2012 MMA scouting report. He has had 9 of his 15 wins come by knockout with 7 of them in the first round. He's trained by Alexander Shlemenko and trains at RusFighters Sport Club (Saturn Prof.MMA team),  BJ Penn's MMA, Reign Training Center, HB Ultimate Training Center, Black House and Storm Fight School.

In January 2012, it was announced that Koreshkov would make his United States debut for Bellator.

In his debut, Koreshkov faced Tiawan Howard on March 30, 2012 at Bellator LXIII. He won via KO in the first round.

Andrey next faced Derrick Krantz on May 18, 2012 at Bellator LXIX. He won the fight via TKO in the third round.

Andrey then faced Jordan Smith on September 28, 2012 at Bellator LXXIV. He defeated Smith after 3 rounds, earning Koreshkov won a unanimous decision victory by demonstrating superior striking and ground and pound.

In the semifinals of the tournament, Koreshkov won via Technical Knockout, defeating Marius Zaromskis in the first round.

Koreshkov faced Ben Askren in a bout for the Bellator Welterweight Championship on July 31, 2013 at Bellator 97. He lost the fight via TKO in the fourth round.

In March 2014, Koreshkov entered the Bellator season ten welterweight tournament. He faced Nah-Shon Burrell in the quarterfinal match on March 14, 2014 at Bellator 112. He won the fight via TKO during the first minute of the first round by quickly dispatching Nah-Shon Burrell with a combination of knees and punches.

Koreshkov was expected to face Sam Oropeza on May 2, 2014 in Welterweight tournament finals at Bellator 118. Oropeza, however, was injured and replaced by Justin Baesman. Koreshkov won via knockout due to a flying knee in the first round.

In the finals, Koreshkov met Adam McDonough at Bellator 122 on July 25, 2014. He won the fight via unanimous decision, securing his second tournament win and title shot.

Koreshkov is expected to face former UFC Lightweight Champion Benson Henderson on April 22, 2016 at the Bellator 153.