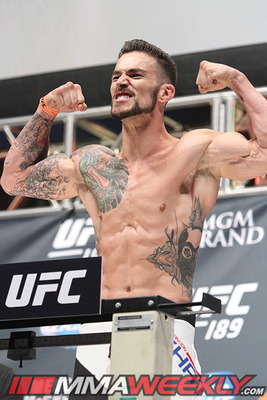 Brandon Thatch is ineligible for regional rankings due to inactivity.
Fighters must have at least one completed MMA bout in the past two years to be ranked.

Following in the footstep of his grandfather (a professional boxer) and his father (a world champion kick boxer and MMA pioneer) Brandon began martial arts at the age of 3 and trained with a young Duane "Bang" Ludwig in Clarence Thatch's gym 3D Martial Arts.
Brandon began fighting in 2007 making his MMA debut against Jesse Brown and winning by RNC in the 2nd round. Brandon then started in the Colorado promotion Ring of Fire and won his next two amateur fights both by stoppage.

In 2008 Brandon made his professional debut for Ring of Fire against Mike Crisman winning 38 seconds into round 1 with a TKO. Brandon then dropped his first pro fight to Brandon Magana at Strikeforce-Playboy Mansion 2. In Brandon's third fight he scored an 18 second KO against Michael Arrant.

After the Arrant fight Thatch suffered a serious neck injury. Thinking it was only a pinched nerve Brandon sought the help of a chiropractor. The chiropractor didn't realize Brandon had actually slipped discs. Neck surgery left Brandon in a neck brace for more then two months.

Thatch made his return to the cage 20 months later stopping Danny Davis Jr. with a 1st round RNC. In Thatch's next fight he knocked out heavy handed Chris Holland in 19 seconds to win the 170 pound RoF Young Guns Championship. Thatch's last fight to date in RoF came at Ring of Fire 41 against Chidi Njokuani with Brandon winning in 53 seconds. Brandon would then move on to the Canadian promotion Instinct MMA going 4-0 for the promotion. Thatch would sign on with RFA and returned home to Denver, CO where he faced off against Duke Roufus prospect Mike Rhodes. Thatch got another first round finish with the RNC submission at 2:22.

The UFC would take notice and sign Thatch who would make his debut at UFC Fight Night 27 against Justin Edwards. Thatch would look impressive in his debut making quick work of Edwards and earning the Knockout of the Night for his first round finish. He would follow that up with another impressive finish over veteran Paulo Thiago delivering a knee to the body that dropped Thiago in the first round forcing him to tap out. Thatch will look to make it 3 straight when he steps in for injured Thiago Alves against Jordan Mein.

Thatch pulled out of the bout with Mein due to a toe injury and was then expected to face Stephen Thompson on February 14, 2015 at UFC Fight Night 60 but Thompson pulled out of the fight on January 30, citing a rib injury.   Barring any injuries, Brandon "Rukus" Thatch is now slated to face Benson "Smooth" Henderson at UFC Fight Night 60.  Benson last faced Donald "Cowboy" Cerrone at UFC Fight Night 59: McGregor vs. Siver.  and came away with a unanimous decision loss.  Will the 15 month layoff effect Brandon or will he start right where he left off with a 1st rd finish?  Will Benson bounce back with a win after 2 straight loses or will he suffer the same fate that he did with Rafael dos Anjos?