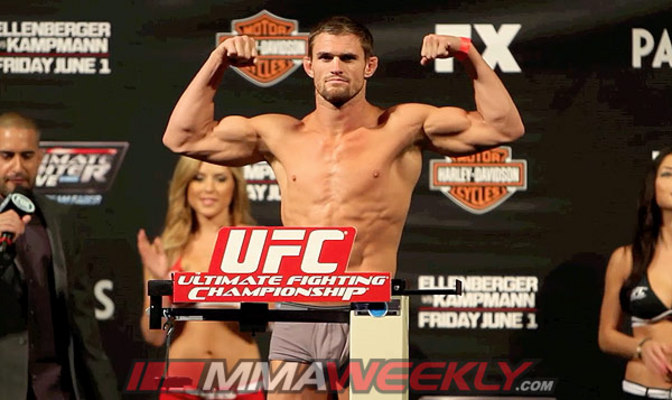 Fighting for a major organization has made Daron Cruickshank ineligible for regional rankings.

Daron Cruickshank is an American lightweight fighter currently signed to the UFC. He is a black belt in Tae Kwon Do and trains under his father at Michigan Top Team in Detroit, Michigan. He was also a NCAA Division III wrestler while he earned a bachelors degree in Fitness Management from Olivet College. He has previously fought for King of the Cage and was s cast member on The Ultimate Fighter: Live. He hold notable wins over Mike Ricci, Chris Tickle, Henry Martinez, and Yves Edwards. Of his fourteen wins, nine have been finishes including eight T/KOs.

Cruickshank grew up around martial arts. His mother was a professional kickboxer and his father holds black belts in numerous martial arts. He made his amateur MMA debut in 2008. Through his amateur career, he was able to earn an 8-1 record while picking up two amateur titles. He turned professional in 2009. In his first fight, he would win with a highlight reel spinning backfist knockout in the first round. After a 5-0 start to his career, he would take on future UFC fighter, Bobby Green, for the Junior Welterweight Championship for King of the Cage. He would lose for the first time in his professional career when Green submitted him in the second round. He would pick up another win before being stopped by TKO for the first time when he took on Bellator veteran, Luis Palomino. Over the next eight months, he would pick up four more wins, including a unanimous decision win over UFC veteran, Mike Ricci, for the Ringside MMA lightweight title.

In early 2012, Daron was selected to be part of The Ultimate Fighter: Live. He won his fight to get into the house by defeating Drew Dober by unanimous decision. After he was selected as Urijah Faber's third pick on the show, the Michigan native would go on to lose by knockout to James Vick in the opening round. Despite the loss, Cruickshank would earn a fight on the under card of the season's finale, where he would fight Chris Tickle. After spending a part of the opening frame stuck inside a guillotine choke, and later getting dropped in the second, Cruickshank would rally and go on to win the fight by unanimous decision.

In his first post TUF performance, Daron Cruickshank would take on Jackson's MMA product, Henry Martinez. The two were originally scheduled to meet at UFC 151, but after the event was cancelled, they would meet at UFC on FOX 5 in Seattle, Washington. Martinez missed weight, weighed in at 158 pounds which caused the fight to be changed to a catchweight bout. Cruickshank dominated the fight with a plethora of striking attacks, even used a strange spinning kick to the leg of Martinez. After battering Martinez for a round and a half, Cruickshank finished the fight with a highlight reel head kick, and needed no follow up to win the stoppage. His two fights after the impressive knockout victory would go the distance, including a loss to John Makdessi, and a split decision win over veteran Yves Edwards. Many MMA fans felt that Edwards deserved the victory. His next fight was against former Strikeforce fighter Adriano Martins, a fight taking place in Goiania, Brazil. He was submitted in an upset by the unheralded Martins.

Cruickshank next faced his TUF: Live castmate, Mike Rio, at UFC on Fox 10. After comfortably winning the first round with striking and coming close to finishing the fight, Cruickshank got in trouble late late in the second, as in a scramble Rio managed to get a hold of his leg and twisted it looking for a heel hook submission. Showing calm under pressure, Cruickshank worked his way out of the hold and then launched a relentless attack on his opponent, overcoming him with a torrent of strikes including a headkick and earned the TKO stoppage with with only four seconds left in the round.

He would finish Erik Koch in his next fight before dropping a decision to Jorge Masvidal. He would bounce back with a Unanimous Decision over Anthony Njokuani. Following his fight with Njkouani, Cruickshank was then scheduled to face KJ Noons at the Ultimate Fighter 20 season finale. Roughly 30 seconds into the 2nd round the fight would be ruled a no contest due to an eye poke. The damage would be permanent as that eye will no longer produce tears due to the damage to the tear duct.