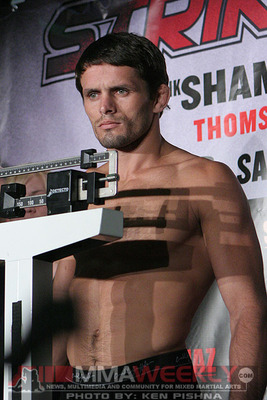 Rodrigo Damm is ineligible for regional rankings due to inactivity.
Fighters must have at least one completed MMA bout in the past two years to be ranked.

Rodrigo Damm is a Brazilian lightweight fighter currently signed to the UFC. He is a  third degree black belt in Brazilian Jiu Jitsu was on the Brazilian National wrestling team and trains out of X-Gym in Brazil. He is a veteran of Shooto Brazil, Bodog Fight, Strikeforce and the UFC. He appeared on the inaugural season of The Ultimate Fighter: Brazil. Of his twelve wins, eight have been stoppages with six submissions. He has won the "Submission of the Night" bonus one time in the UFC. His sister Carina Damm is also a successful fighter.

Although he lost his first fight by split decision, Damm would go on to have an eight fight win streak. He would eventually work his way into a lightweight title fight in Strikeforce against Gilbert Melendez. He would suffer his first KO in this fight. He would come back with another win but would again lose two in a row. This made is last five fight record 1-4 with three T/KO losses before he was signed to appear on the UFC reality show, The Ultimate Fighter: Brazil.

On TUF, Rodrigo would win his elimination fight by second round rear naked choke. He was picked eighth over all and was placed on Team Vitor. He won his quarterfinal fight by close split decision but would have to withdraw from the tournament before his semi final due to kidney problems related to his weight cut.

Damm was given a fight at UFC 147 against his rival from the house, Anistavio Medeiros. He was able to win the the fight with a rear naked choke and picked up Submission of the Night honors. He lost his next outing against Antonio Carvalho by split decision but would pick up a split decision win against Mizuto Hirota. He was set to fight Hacran Dias at UFC Fight Night 29 but had to pull out just four days before the fight due to kidney problems during his weight cut including kidney stones. His manager stated that he was likely to move up to lightweight in the future so he can fight closer to his natural weight. He made his lightweight debut against Ivan Jorge at UFC Fight Night 36 and was able to pick up a unanimous decision win.

At The Ultimate Fighter Brazil 3 Finale: Micocic vs. Maldonado, on 31 May, 2014, Damm faced Rashid Magomedov. Damm lost the fight via unanimous  decision.

Damm's next fight was another lost. He fought Al laquinta at UFC Fight Night 50: Jacare vs Mousasi, It was a close fight, until Al laquinta was to KO Damm at 2:26 in Round 3.