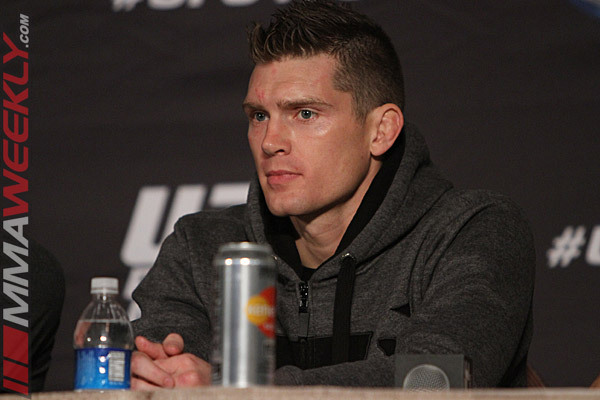 Fighting for a major organization has made Stephen Thompson ineligible for regional rankings.

Stephen Thompson is an American welterweight fighter currently signed to the UFC. He has a blue belt in Jiu Jitsu under Carlos Machado as well as black belts in Japanese Jiu Jitsu, Kenpo Karate and kickboxing. He was a sixteen time amateur kickboxing champion witha record of 37-0 and a 20-0 professional kickboxer. Thompson is also the head instructor for the kid's program at Upstate Karate in his hometown of Simpsonville, South Carolina which is also where he trains. He holds notable wins over Nah-Shon Burrell and Chris Clements. Of his nine professional MMA wins, six have been finishes including five T/KOs. He has won the UFC "Knockout of the Night" and the "Performance of the Night" bonuses one time each.

Thompson began training in martial arts when he was only three years old. His father owned a Karate school where Stephen and all of his siblings trained from a young age. He began amateur kickboxing in his teens and would rack up sixteen amateur titles and a 37-0 record by the age of 20. In 2003, he turned professional and was able to win two more titles as a cruiserweight with a record of 20-0. In 2006, he was ranked number one in Chuck Norris' World Combat League.

Stephen would make the transition to MMA in 2010 and win his first five fights before getting the call from the UFC. He would be matched up against Dan Stittgen at UFC 143 where he won "Knockout of the Night" honors with a beautiful roundhouse to the head to finish the fight. He would drop his next match by unanimous decision to the always tough Matt Brown. This fight showed that Thompson had some work to do to round out his MMA game. He would get another shot to show his skills in the octagon a year later at UFC 160 when he faced off against Nah-shon Burrell. He would show some improved grappling skills en route to a unanimous decision victory. He fought Chris Clements at UFC 160 and was able to finish the Canadian by TKO in the second round. He next fought The Ultimate Fighter: The Smashes winner and fellow Karate black belt, Robert Whittaker, at UFC 170. Thompson was able to put together combinations and eventually knocked down Whittaker, resulting in a TKO victory. He was also awarded "Performance of the Night".

Stephen Thompson went on winning his next 4 fights in the UFC against Patrick Cote, Jake Ellenberger, Johnny Hendricks and Rory MacDonald. The fight against Ellenberger added to his highlight reel a beautiful spinning hook kick to the head of Ellenberger who prior to the fight was convinced Thompson could not do any "karate stuff" to him.

He campaigned for a fight against then champ Robbie Lawler but as Lawler lost the title against Tyron Woodley, Thompson got scheduled to fight Tyron Woodley for the UFC welter weight title at UFC 205.

It was a hard fought fight in which Thompson never gave up and was able to withstand hard ground and pound and several submission attempts by the champ and still was able to hurt him on the feet. After 5 hard rounds it ended in a majority decision draw.

The rematch happened at UFC 209. The fight ended being a lesser version of the first and Thompson lost a majority decision against Woodley.

After that Thompson fought Jorge Masvidal on the legendary Bisping VS GSP UFC 217 card. He won the fight via unanimous decision as Masvidal never could figure out neither his distance management nor his fast blitz attacks and range kicks.

Thompson stepped up and fought Darren Till in Liverpool at UFC Fight Night 130 as the main event.

The fight was a strikers chess match that wasn't really what it promised but Till dropped Thompson in the fifth round and edged a "unanimous" decision win against Thompson.

Thompson fought Anthony Pettis at UFC On ESPN + 6 and lost the fight via second round K.O. Anthony Pettis coming up in weight was able to do so with a beautiful super man hook punch bouncing from the cage and Stephen Thompson delivered one of the more classy and funny post knockout - hospital videos messages ever.

He is scheduled to fight Vicente Luque at UFC 244.