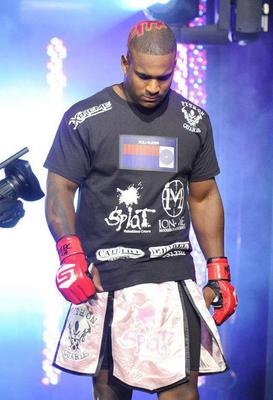 Fighting for a major organization has made Lorenz Larkin ineligible for regional rankings.

Born and raise in Riverside, California. His parents frowned upon contact sports for fear of the damage they might inflict upon his son. Despite his parental objections, Larkin took up American football initially, but gave it up soon afterwards because he "sucked at it". Afterwards, he began boxing but was not able to compete as much as he would like to, due to his parents. He also felt that he was too short to be a professional boxer in the Heavyweight division, so he took up kickboxing and Brazilian Jiu-Jitsu which led him to mixed martial arts.
When Strikeforce was purchased by Zuffa, Larkin was one of the many fighters to be signed onto the UFC.

On February 9, 2013, the UFC announced that Larkin would make his debut against Francis Carmont at UFC on Fox: Henderson vs. Melendez in San Jose, California. He lost the fight due to a controversial unanimous decision with many major MMA media scoring the fight as a win for Larkin.

May 10, 2014, Larkin lost to Costas Philippou via KO at 3:27 of the 1st round. He would then lose his third straight fight, this time by decision to Derek Brunson.

There has been strong indications by Larkin and his coaches that Larkin will drop down to the Welterweight Division. This will be Larkin's third division he will fight in, as he has previously fought at 205 and 185.