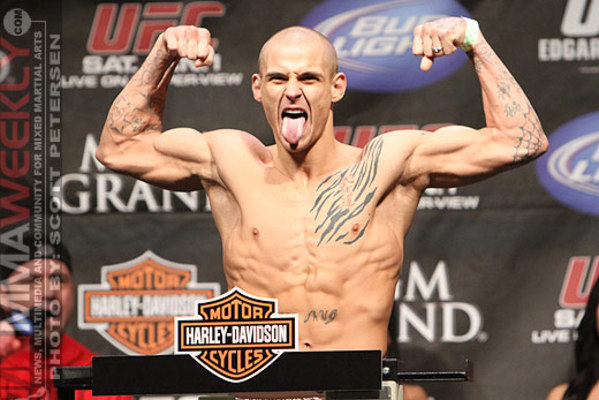 Fighting for a major organization has made Dustin Poirier ineligible for regional rankings.

Dustin Poirier began his mixed martial arts career in 2007 fighting as an amateur on local cards, most of which were in his home state of Louisiana. He turned pro in 2009, subsequently finishing all of his opponents on his way to getting signed by the WEC. He would lose a decision in his first fight but bounce back quickly with a first round finish of Zachary Micklewright a few months later.

The WEC merged with the UFC and in his first fight for the promotion Dustin was a heavy underdog but defeated Josh Grispi by Unanimous Decision. He went on to win his next 3 fights before losing to top contender Chan Sung Jung in the fight of the night. Dustin rebounded at the Ultimate Fighter 16 Finale with a comeback d'arce choke victory over Jonathan Brookins. The very same choke that he was defeated with in his previous bout. Poirier has now stepped up to replace the an injured Dennis Siver and will square off against Cub Swanson in the co-main event at UFC on Fuel 7. Dustin would come up short losing a Unanimous Decision to Swanson.

Poirier would get back in the win column when he faced Erik Koch at UFC 164. After surviving a triangle attempt in the first round Poirier would survive and take over winning the fight by Unanimous Decision. His next test would be against ultimate fighter winner Diego Brandao at UFC168. Things got heated at the weigh-ins and it was speculated that Poirier was possibly upset because Diego failed to make weight for the fight. Poirier would finish the Ultimate Fighter winner in the first round by TKO and would later reveal that Brandao had threatened to stab him in the neck backstage which is why he was so fired up. Poirier would follow that up with another win over a TUF fighter when he was able to finish Akira Corassani in the second round by TKO. The two had an epic first round that saw Poirier get hit hard but he was able to recover and almost finished Corassani with a peruvian necktie. The back and forth would earn them Fight of the Night.

He would drop his next fight when he faced rising star Conor McGregor. He was finished by TKO for the first time in his career in the first round. Poirier will now set his sights on another weight class as he moves up to lightweight and will face Carlos Diego Ferreira in his first bout at that weight.

Dustin Poirier was also the in the documentary Fightville that followed the lives of fighters in Louisiana.

Interview video with Dustin Poirier, likely used as a submission for his application to be in The Ultimate Fighter reality show. In the video Dustin talks about his background, how he got into fighting, and why he thinks he can make it on the bigger stage of the UFC and TUF.