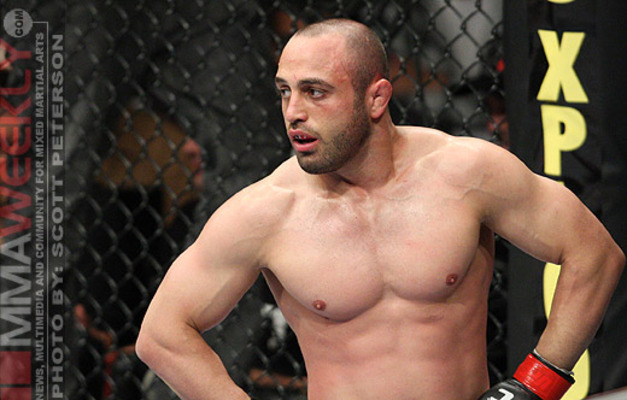 Manny Gamburyan is ineligible for regional rankings due to inactivity.
Fighters must have at least one completed MMA bout in the past two years to be ranked.

Manny Gamburyan is an Armenian featherweight fighter currently signed to the UFC. He is a second dan black belt in Kyokushin Karate and a third dan black belt in Judo. He trains out of North Hollywood, California along with his cousin, Karo Parisyan, and is a coach for Ronda Rousey. He has previously fought for King of the Cage and World Extreme Cagefighting and was a finalist on the fifth season of The Ultimate Fighter. Manny has notable wins over Jorge Santiago, Sammy Morgan, Nate Mohr, Leonard Garcia, Mike Brown, and Cole Miller. He won the WEC "Knockout of the Night" bonus one time. Of his thirteen wins, eight have been finishes including six submissions.

Gamburyan began training in judo when he was very young. He would become an eight time Junior National Judo champion, the Junior Olympics Judo champion and a member of the 2000 World Judo team. He would begin his professional MMA career in 1999 by entering a one night, four man tournament. He was able to win the tournament by submitting both of his opponents in a total of thirty three seconds. He would pick up two more submission wins in the following two years. In 2001, he was given a fight with future UFC champion, Sean Sherk. Manny would go the distance for the first time in his career, but would end up on the wrong end of a unanimous decision. He would take two and a half years off from the sport, but would pick up two wins over future UFC fighters, Jorge Santiago and Sammy Morgan, upon his return.

In early 2007, Manny would be selected to take part in the fifth season of The Ultimate Fighter. At this point, he had not fought in over three years. He was selected as the tenth overall pick by Team Pulver. Throughout the show, he demonstrated fierce pride for himself, his family, and his native Armenia which resulted in him nearly getting in numerous fights with fellow cast members. He took on Noah Thomas in his first round fight and was able to submit him with a kimura in the first round. He fought Matt Wiman in his quarter final fight by two round unanimous decision. He would take on Joe Lauzon in the semifinals and despite being viewed as a major underdog going in, he was able to win a three round decision over the much larger Lauzon. Dana White apologized to Manny after the fight for underestimating him throughout the tournament.

Gamburyan would make his official UFC debut at The Ultimate Fighter 5 Finale against fellow finalist and close friend, Nate Diaz. Although he was winning much of the fight by controlling Diaz on the ground, he dislocated his shoulder in the second round and lost the fight by TKO due to injury. Even though he lost his fight, he was granted a UFC contract due to his fierce style in the cage. He would pick up first round submissions over Nate Mohr at UFC 79 and Jeff Cox at UFC Fight Night 13. He took on fellow TUF season five cast member, Rob Emerson, at UFC 87, but would be knocked out in just twelve seconds. In early 2009, Manny would take on Thiago Tavares at UFC 94, but would lose by unanimous decision, marking the first two fight losing streak of his career.

After losing two fights in a row at lightweight, Manny decided that it was in his best interest to drop to featherweight. Since there was no 145 pound division in the UFC at that time, he moved over to the WEC. He would make his featherweight debut at WEC 41 against John Franchi and would pick up a unanimous decision. He would pick up a second straight unanimous decision win against Leonard Garcia at WEC 44. He took on former WEC featherweight champion, Mike Brown, at WEC 48. Despite being a big underdog going into the fight, Gamburyan was able to knock Brown out in the first round which earned him "Knockout of the Night". This string of success earned him a shot at then WEC featherweight champion, Jose Aldo. Manny was again a big underdog going into the fight and ended up being knocked out by the champion in the second round.

When the WEC ceased operations in 2010, Manny was moved over to the UFC's new featherweight division. Unfortunately, he would lose a majority decision to Tyson Griffin at UFC on Versus 4 and a unanimous decision to Diego Nunes at UFC 141. This was the first three fight losing streak of his career. He would get back to his winning ways when he was able to pick up a unanimous decision over Michihiro Omigawa at UFC of Fox 4. He took on fellow TUF 5 cast member, Cole Miller, at UFC Fight Night 26. At the end of the first round, it appeared that Manny had lost by TKO since he collapsed at the end of the round. Referee Yves Lavigne allowed him to recover in his opponents corner for part of the rest period before moving him to his own corner and allowing him extra time to recover. Manny would recover and ultimately won a unanimous decision. Miller would appeal the decision but was unsuccessful. Gamburyan next took on Dennis Siver at UFC 168. In a back and forth battle, Manny would come up on the short end of a unanimous decision. This was the case, until Silver tested positive for hCG. This was Gamburyan's first NC.

On 10 May, 2014 at UFC Fight Night 40: Brown vs. Silva, Gamburyan fought Nik Lentz. Gamburyan was slated as a heavy underdog, but nevertheless he stood his ground, but was simply outclassed by Lentz as he won it via UD.

With a UFC record of 4-6-1, Gamburyan decided to make the shift to Bantamweight and made his debut in the division on 27 September, 2014 at UFC 178: Johnson vs. Cariaso. He faced Cody Gibson and even though he was considered the underdog going into the bout he controlled the fight and eventually was able to pull off a guillotine choke at 4:56 in Round 2.