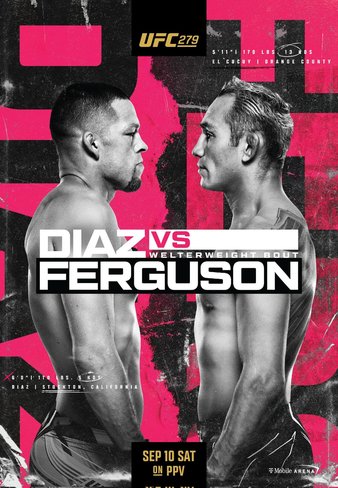 
according to Chimaev's coach they were on course to make weight and the night before Chimaev started vomiting and having problems. there was a social media post of some fan saying they saw Chimaev in a restaurant for hours eating and drinking sparkling water that same night. so basically Holland and Diaz made him stress eat the night before he had to weigh in, and because he ate so much ****** food he made himself sick.

nope, I know myself so I don't do it. things would just get bad

Tapology members can make predictions for upcoming MMA & Boxing fights. UFC 279 is closed for new predictions. 4,936 total members made predictions on this event, breaking down as follows below.

Leaderboard of the best predictions by member: UFC 279 Leaderboard

UFC 279 was expected to be headlined by a welterweight bout between Khamzat Chimaev, and Nate Diaz, however right before the press conference, two days before the event, a brawl broke out between the camps of Chimaev, and Kevin Holland, and the whole conference had to be cancelled for the first time in UFC history. Then the next day during the weigh ins Khamzat Chimaev missed weight by a whopping 7.5 pounds, which left the UFC scrambling for any way to salvage the card as Nate Diaz refused to take the fight against an opponent that big.

After a few long hours the day of the weigh ins, the UFC managed to salvage the card by switching opponents around in the top 3 fights of the card, so instead of having Khamzat Chimaev VS Nate Diaz, Li Jingliang VS Tony Ferguson, and Kevin Holland VS Daniel Rodriguez, we would instead of Tony Ferguson move up to the main event for a long awaited fight against fellow Ultimate Fighter, Nate Diaz, Khamzat Chimaev would move down to the co-main event to take on Kevin Holland who he had been beefing with ever since Fight Island in 2020, and Li Jingliang would accept a fight against Daniel Rodriguez who weighed in at 180 pounds, 10 pounds above Li, thus creating the "Switcheroo Six".

UFC 279 Is also the card with the most catchweight bouts In UFC History, with 4 fights scheduled to be catchweights, and two more becoming catchweight after Hakeem Dawodu, and Chris Barnett, missed weight. Barnett becoming the second heavyweight to miss weight in the UFC, only Justin Tafa has missed the Heavyweight limit prior, as he weighed in at 267 against Harry Hunsucker.