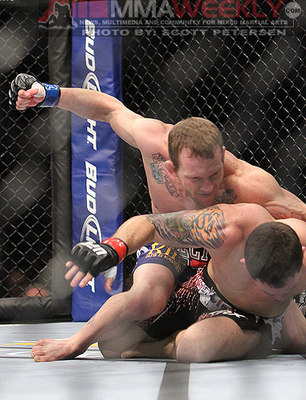 Gray Maynard is ineligible for regional rankings due to inactivity.
Fighters must have at least one completed MMA bout in the past two years to be ranked.

Gray “The Bully” Maynard is one of the UFC’s top lightweight fighters. He was the first man to defeat fellow lightweight Frankie Edgar, but it was Edgar and not Maynard who was granted a title shot against longtime champion BJ Penn in April 2010 by Dana White, Joe Silva and the rest of the UFC brass. Edgar went on to win the title in that fight.

Maynard was a decorated amateur wrestler, with over 100 wins in his collegiate career at Michigan State University. Maynard’s first professional MMA fight was in 2006, and by 2007 he was fighting in the Octagon, following a succesful show of himself on season five of The Ultimate Fighter reality series. Maynard's official UFC debut was was very strange, as he slammed Rob Emerson to the canvas, but spiked his own head to the canvas, and effectively left both fighters unable to continue and resulting in a no contest. Maynard has since gone on to record impressive UFC wins over Jim Miller, Roger Huerta and Nate Diaz (who had defeated Maynard in an exhibition fight as part of The Ultimate Fighter), as well as record one of the fastest knockouts in UFC history with a 9-second destruction of Joe Veres at UFC Fight Night 11.

In 2011, Maynard would challenge new UFC lightweight champion Frankie Edgar. In the first round the much larger Maynard was able to drop Edgar several times, almost knocking him out but unable to finish him. After the first round, it was apparent that Maynard had punched himself out, and Edgar was able to battle his way to a majority draw. Following the match it was announced that Edgar would have an immediate rematch with Maynard, instead of fighting planned challenger Anthony Pettis. However, both Edgar and Maynard suffered injuries and their rematch had to be postponed.

They fought again nine months later, and again Maynard was almost able to knock out Edgar, in the first round with the "Answer" battling back in the following rounds. This time however, Edgar was able to knock out Maynard to end their thrilling trilogy. Maynard would then take some time off before departing from his long time training camp at Xtreme Couture. He would the spend some time at Nova Uno, helping Jose Aldo train for Chad Mendes, before settling at American Kickboxing Academy. The "Bully" then face off with Clay Guida, who surprising avoided Maynard for most of the fight, giving Maynard the decision in a very disappointing bout. Maynard then was expected to face Joe Lauzon, but was forced to pull out of the bout with a knee injury. Instead he would face TJ Grant at UFC 160 in what was expected to be a #1 contender bout. However Maynard would be upset when Grant was able to finish him in the very first round by TKO.

The “bully” moniker is well-suited to Maynard, who likes to push his opponents around. He brings a modern MMA wrestler’s playbook to the cage: smother your opponent with a dominant top game, stuff your opponent’s takedowns, and throw gigantic overhand rights on the feet. The deceptively simple strategy has paid dividends for Maynard because he is better at it than most.

Episode 9 Maynard def. Brandon Melendez by Guillotine Choke at 4:07 of Round 2

Episode 12 Nate Diaz def. Gray Maynard by Guillotine Choke at 1:17 of Round 2