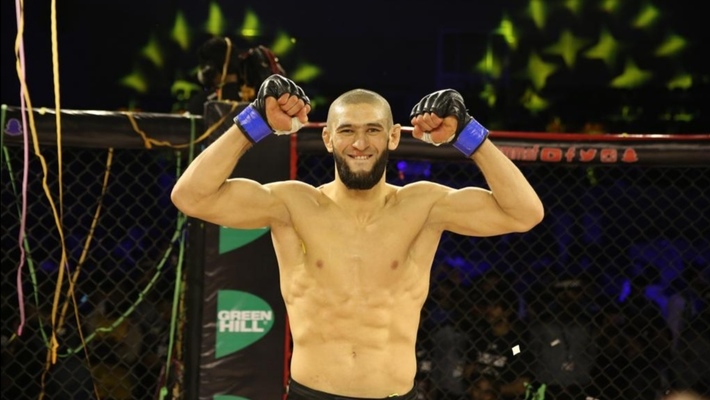 Fighting for a major organization has made Khamzat Chimaev ineligible for regional rankings.

Khamzat Chimaev is a Swedish mixed martial artist who was born in Chechnya, Russia where he started to train mainly wrestling and grappling at the age of 5. He would go on to take the bronze medal at the Russian National Junior Wrestling Championships, and would also become a multiple time Swedish Freestyle Wrestling Champion after he immigrated to Sweden when he was 19 years old, claiming asylum there.

Khamzat has an older brother named Artur, who also competes in freestyle wrestling.

Chimaev carries a notable scar on his lip, which he got at the age of two when he fell down on concrete stairs, leaving him unable to breathe correctly through one nostril. Before he began competing professionally, he worked at a poultry factory and also did some security work.

He has been signed to the UFC since July 2020.
Chimaev is notable for breaking the quickest turnaround record in the UFC in his first two fights. After winning his debut on July 16th he won his second fight only ten days later on July 26th. That fact combined with his self confident demeanour which also made him an instant favourite in the eyes of the bossman himself, Dana White made Chimaev a massive star over night.

Chimaev trains at Allstar Training Center in Stockholm, Sweden along side the known fighter Alexander Gustafson and Illir Latifi.

He was scheduled in his biggest test to date as the UFC is lining him up against top 5 contender Leon Edwards who himself is on a 8 fight winning streak in the UFC.  The fight was originally booked to happen as the main event on the last card of the year 2020 on the 19th of December at UFC Vegas but it had to be postponed due to Edwards testing positive for COVID-19 prior to the fight. The fight would be rescheduled for early 2021. Unfortunately, the fight would fall apart for the 3rd time as Chimaev was still struggling from Covid-19. He would have a short retirement after claiming that he almost died from the COVID he had caught. His retirement would quickly be reversed as he was given a fight with #11 Jingliang Li at UFC 267 to get a spot in the UFC top 15 at 170 pounds. Chimaev would submit Jingliang in the first round without being hit once. Chimaev is now 10-0 (4-0 UFC) with all 10 wins coming by finish before the 3rd round. He has only been hit by 1 significant strike in the 4 fights he has competed in in the UFC. Chimaev is currently scheduled to face UFC middleweight contender in a freestyle wrestling match on November 20 2021.