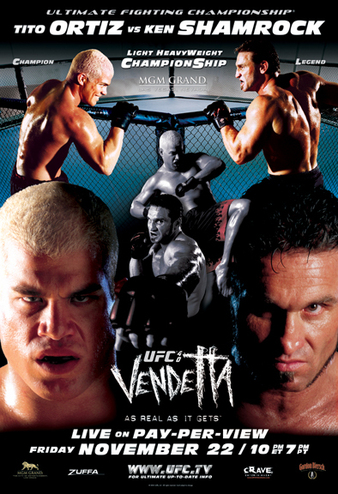 #44
Greatest Event of All Time

UFC 40, which featured a Light Heavyweight Championship grudge match between long time rivals Ken Shamrock and Tito Ortiz, was the single most important event in the early days of Zuffa management. The event did 150,000 Pay Per View buys, quadrupling some of Zuffa's recent past events and proving that the UFC could make a significant amount of money with the right marketing and match making.

In the lead-up to the fight between Ortiz and Shamrock, both fighters appeared on The Best Damn Sports Show Period to hype the bout, and the fight drew mainstream media attention from ESPN and USA Today, something unprecedented for MMA prior to that time. Following a lopsided beatdown, Ortiz won the fight when Shamrock's corner stopped the bout after the third round.