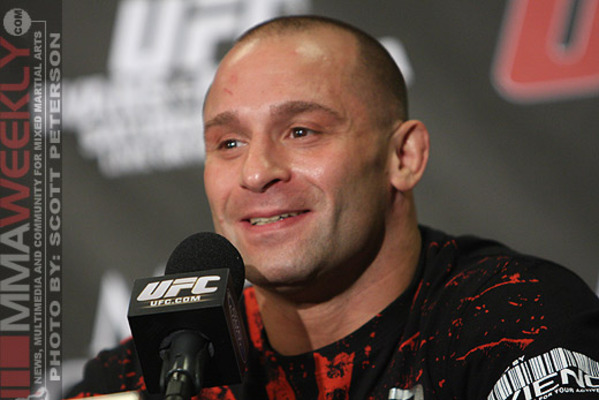 #99
Greatest MMA Fighter of All Time

Matt Serra is ineligible for regional rankings due to inactivity.
Fighters must have at least one completed MMA bout in the past two years to be ranked.

Matt Serra is a former UFC world welterweight champion, an ADCC Submission Wrestling Silver Medalist, and one of America’s first Brazilian Jiu-Jitsu black belts under the legendary Renzo Gracie. In roughly a decade fighting under the UFC banner Serra has had a mixed record of success, suffering occasional setbacks but also achieving some tremendous highs during his time in the promotion.

Primarily a ground specialist, Serra nonetheless has some of the heaviest hands in the division. He sports knockout wins over Frank Trigg and, most notably, Georges “Rush” St. Pierre, whom Serra knocked out in one of the sport’s all-time greatest upsets to seize the welterweight crown. In close losses to Karo Parisyan and Matt Hughes, Serra had both combatants literally stunned senseless, and was moments from finishing both fights with his deceptively potent striking game.

For a variety of reasons, Serra remains one of the most famous and recognizable fighters in any division. Blessed (some would say cursed) with a tremendously outgoing and talkative personality, Serra is among the most quotable fighters competing in MMA today. He is a “love him or hate him” type of fighter, and while some will always choose to hate him, fan ovations at his recent bouts suggest that most still love him. He is extremely proud of his Italian-American heritage and his Long Island, New York upbringing.

Serra also received tremendous exposure as a result of his participation on Season 4 of The Ultimate Fighter, which not only revived a somewhat flagging fight career but, as a result of his standout success on the show, brought him the title shot against St. Pierre which Serra capitalized on so dramatically. Serra remains one of the few fighters to move from contestant status to coaching status on The Ultimate Fighter, as he was selected to coach on Season 6 in run-up to his long-awaited grudge match with Matt Hughes. Many believe Serra won the Hughes fight. Serra runs two Brazilian Jiu-Jitsu academies in New York and remains in a period of flourishing in his fight career.

Episode 7 Quarter Finals Serra def. Pete Spratt by Submission (Strikes) at 3:26 of Round 1