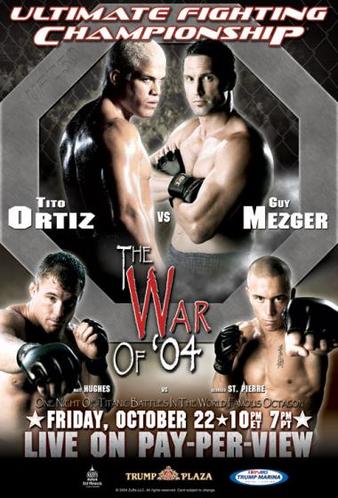 Although it was expected to be a successful Pay Per View endeavor, UFC 50, which featured a main event pitting former Light Heavyweight Champion Tito Ortiz against Canadian knockout artist Patrick Cote, was one of the poorest-performing events in company history, drawing just 40,000 buys.

In hindsight, UFC 50’s poor Pay Per View showing is astounding considering the drawing power some of the fighters on the card would carry in the near future, including names like Matt Hughes, Georges St-Pierre, Rich Franklin, and the aforementioned Ortiz.

Cote was a late replacement opponent for Lion's Den fighter Guy Mezger, who was forced out of the contest after being taken to the hospital due to stroke-like symptoms, and eventually forced out of professional fighting as a result. Cote’s late fill-in may have contributed to the dip in purchase numbers, yet Cote put on a game performance considering the short notice.