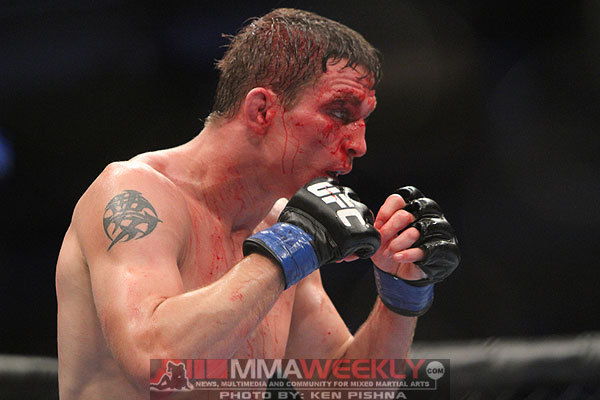 Fighting for a major organization has made Darren Elkins ineligible for regional rankings.

Darren Keith Elkins (born May 16, 1984) is an American mixed martial artist signed to the Ultimate Fighting Championship (UFC) where he fights in the featherweight division. As of February 29, 2016, he is #11 in the official UFC featherweight rankings.

Elkins was born in Hobart, Indiana and competed all four years in wrestling for Portage High School. Elkins placed seventh as a freshman, Qualified as a sophomore, third as a junior, and was a State Champion as a senior. Darren also won multiple Freestyle State Championships as a youth. Elkins then went to college for two years and wrestled at University of Wisconsin Parkside, but didn’t earn a degree.

Elkins made his UFC debut on the preliminary card of UFC on Versus: Vera vs. Jones, where he defeated Duane Ludwig via TKO after Ludwig suffered a serious ankle injury after being taken down by Elkins in the first round.

His next bout took place on the preliminary card of UFC Live: Jones vs. Matyushenko against Charles Oliveira. Elkins took Oliveira down early, but his opponent quickly attempted a triangle choke. Oliveira then transitioned to an armbar, which forced Elkins to submit.

Elkins was expected to face touted prospect Edson Barboza on November 20, 2010 at UFC 123, but Elkins was forced from the card with an injury and replaced by Mike Lullo.

Elkins made his Featherweight debut against world ranked Michihiro Omigawa on June 11, 2011 at UFC 131. He won the fight via controversial unanimous decision.

Elkins won a unanimous decision over Zhang Tiequan on October 8, 2011 at UFC 136.  After several failed guillotine attempts from Zhang, Elkins was able to dominate him from top position including at several points mounting him and pounding away with strikes.

Elkins defeated TUF 14 winner Diego Brandão on May 26, 2012 at UFC 146. Elkins utilized his top game with ground and pound to win the second and third rounds, earning him the unanimous decision victory.

Elkins fought fellow featherweight prospect Steven Siler on November 17, 2012 at UFC 154. After dominating the fight for three rounds, Elkins was awarded the unanimous decision victory, moving him to 4-0 at featherweight and 5-1 overall in the UFC.

Elkins faced Antonio Carvalho on March 16, 2013 at UFC 158. Elkins won via first round TKO stoppage after landing strikes that rocked Carvalho followed by a knockdown, prompting the ref to intervene.

After taking virtually no damage in the fight against Carvalho, Elkins made a quick return and faced Chad Mendes on April 20, 2013 at UFC on Fox 7, replacing an injured Clay Guida. He lost the fight by 1st round TKO.

Elkins faced Hatsu Hioki on August 28, 2013 at UFC Fight Night 27. After getting hurt by a body kick late in the first round, Elkins rallied in the last two rounds and won the fight via unanimous decision.

Elkins faced Jeremy Stephens on January 25, 2014 at UFC on Fox 10.He lost the fight via unanimous decision.

Elkins was briefly linked to a matchup with Tatsuya Kawajiri on September 20, 2014 at UFC Fight Night 52, but the bout never materialized as Kawajiri was sidelined indefinitely with a detached retina.

For a third consecutive fight, Elkins appeared on an international card where he faced Robert Whiteford on October 24, 2015 at UFC Fight Night 76. He won the fight by unanimous decision.