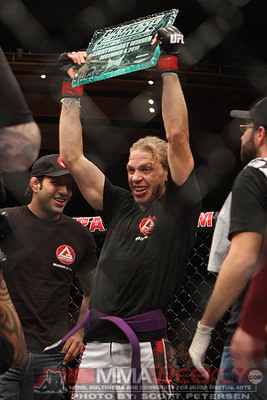 Jonathan Brookins is ineligible for regional rankings due to inactivity.
Fighters must have at least one completed MMA bout in the past two years to be ranked.

Jonathan Brookins was a a two-time state wrestling champ at his high school in Oregon. He received a full scholarship to Lindenwood University but after two years moved to Ocala, Florida due to a family tragedy and began training MMA. Brookins holds a purple belt in Brazilian Jiu Jitsu. He would win his first fight with a 19 second knockout over Allen Berubie in 2006. His other notable fights were a third round TKO loss to future Featherweight champion Jose Aldo "Junior" in the WEC and a submission win over Stephen Ledbetter in the first ever Bellator card.

Brookins would get his shot on the 12th season of The Ultimate Fighter series winning his way into the house with a Unanimous Decision over Greg Jackson trained fighter Ran Weathers. He was selected to Team GSP and in his preliminary match against Sevak "Silverback" Magakian he would finish him by  submission to a rear-naked choke in the first round. In his quarter-final match up he would again finish the 12th season's other Armenian contestant, Sako "The Psycho" Chivitchian, in eerily similar fashion to his previous victory.  He would win his semi-final match by Unanimous Decision over Kyle Watson, sending him to the finals where he would win a hard fought Unanimous Decision victory over fellow Team GSP member Michael "The Menace" Johnson, battling back from a tough first round that saw him dropped and repeatedly hammered with a hard strikes.

Brookins would go 1-2 after winning The Ultimate Fighter, dropping a decision and losing by submission to top featherweights Erik "New Breed" Koch and Charles "do Bronx" Oliveira respectively, and flashing his little-seen knockout power in a ground and pound knockout victory over Vagner "Ciara" Rocha.  In Brookins' next outing at The Ultimate Fighter Finale 16, he would face Dustin "The Diamond" Poirier where he would lose via submission (Brabo/D'arce Choke) in the first round.

In December of 2012 Brookins announced his retirement from MMA in order to move to India and practice Yoga full-time.  On January 24th, 2014 Jonathan announced he would be coming out of retirement to fight for Legacy Fighting Championship at Flyweight (125 pounds) when he's never fought below Featherweight (145 pounds).

He made his Flyweight and LFC debut March 21st, 2014 at Legacy FC 29: Garcia vs. Howell against Cody Fuller.  He won the fight via Submission (rear-naked choke) at 3:02 of the 2nd round.

Episode 6 Brookins def. Sevak "Silverback" Magakian by Rear Naked Choke at 2:04 of Round 1

Episode 9 Brookins def. Sako "The Psycho" Chivitchian by Rear Naked Choke at 2:05 of Round 1