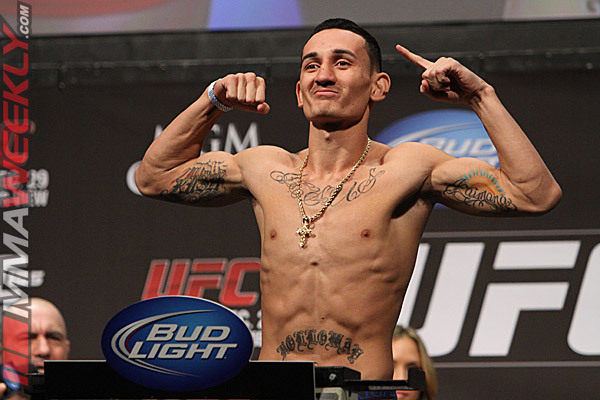 Fighting for a major organization has made Max Holloway ineligible for regional rankings.

Max Holloway is an American featherweight fighter currently signed to the UFC. When he joined the UFC, he was the youngest fighter on the roster, but currently he is the fourth youngest. He has previously fought for X-1 in his native Hawaii where he was the lightweight champion. He has notable wins over Pat Schilling, Leonard Garcia, and Justin Lawrence. Of his eight professional wins, only three have been finishes with all coming by T/KO. He has earned the UFC "Knockout of the Night" bonus one time.

Holloway started training MMA in 2007 at the end of his sophomore year in high school. He was able to win three amateur titles in a three month period at 808 Battleground, Destiny, and Just Scrap. He would make his pro debut for X-1 in Hawaii and won his first two fights before being given a title shot. He would face off against Harris Sarmiento who had over fifty fights experience at the time. Holloway was able to walk away with the win via split decision victory, earning himself another belt. He would fight once more in Hawaii before being signed to the UFC.

Max was signed by the UFC in early 2012. He would step in as a late replacement in his promotional debut against fellow prospect, Dustin Poirier, at UFC 143 but he would lose by submission in the first round. Although he lost, he looked impressive in his stand up game. He would win the next time out with a unanimous decision over Pat Schilling and a second round TKO with a body shot over Justin Lawrence. He faced off against Leonard Garcia at UFC 155 as a late replacement. In a back and forth war, Holloway was able to come away with a controversial split decision. In his next fight however, he was on the other end of a controversial decision as he lost a split decision to Dennis Bermudez at UFC 160. He would lose consecutive fights for the first time in his career when he came up on the wrong end of a unanimous decision against Conor McGregor which moved his UFC record to 3-3 over an eighteen month span. He next took on UFC debutant, Will Chope, at UFC Fight Night 34 in Singapore. He was able to pick up the TKO victory midway through the second round and also earned the "Knockout of the Night" bonus.

Holloway would win his next two fights finishing Andre Fili and Clay Collard both in the third round. He would add another bonus to his record for a Performance of the Night for his TKO finish of Akira Corassani.