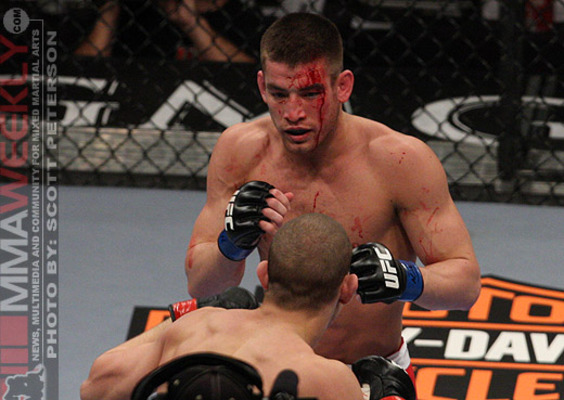 Sam Stout is ineligible for regional rankings due to inactivity.
Fighters must have at least one completed MMA bout in the past two years to be ranked.

Having won multiple professional kickboxing titles prior to his run in the UFC’s lightweight division, Sam Stout is one of the most technically proficient strikers in the UFC. Stout made an immediate impact in the UFC and attracted droves of fans when he defeated Spencer Fisher in UFC 58’s Fight of the Night in 2006. After a brief hiatus from the UFC following a submission loss to Kenny Florian, Stout returned in 2008, winning notable victories over Matt Wiman and Fight of the Night over Joe Lauzon en route to reemerging as a viable contender in the lightweight division. He would win a Knockout of the Night for his finish of veteran Yves Edwards making it his first finish in the octagon. His latest victory was a Unanimous Decision and a Fight of the Night with his 3rd fight with Spencer Fisher.

Stout is renowned for his ability to take significant damage from powerful strikers without being knocked out, as in his rematch with Spencer Fisher and his 2010 bout with power puncher Jeremy Stephens. He has looked sharper and sharper in his most recent Octagon appearances and may be poised to contend in the upper echelons of the division.