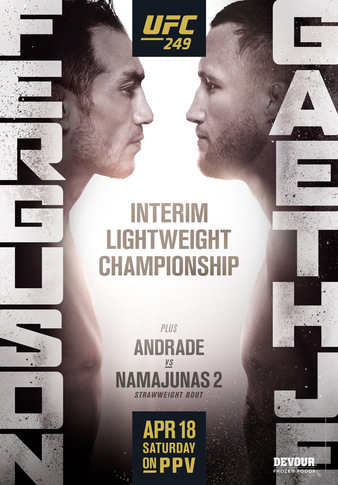 This event was cancelled.

Here’s a full list of fights targeted for the UFC show on May 9. All matchups are subject to change:

@ImperatorFishrat I would contend that human experience is independent of the economy, and that the best human experiences are in fact quite far from economics. As far as no economy = no civilization, you might have something there...as long as you aren't implying a capitalist-based economy.

Economics defines human experience. Unless of course you believe that someone born in a Keralese slum has the same quality of life experience as someone born to an upper middle class family in the Hamptons, and anyone who believes such a thing is a stupid ignoramus. If you had been born in 14th century, you'd probably have died of a tooth abscess in a ditch before age fifty having little more understanding of the world beyond pain and hunger, or the several cattle you owned. Existentialism 101. Remember your Foucault. Economics is so powerful in fact that epidemiologists are able to make accurate predictions relating to diseases based on postcodes alone.

Uncontacted tribes in the Amazon basin are subject to economics. Every human being that has ever existed, or ever will, is and will be either largely or completely defined by economics. It is an inescapable consequence of existence. Reality is not something born into; it is acquired. In the same way that Biology cannot only produce forms of life according to what the dictates of physics allow it to based on parameters, economics will largely define the conscious reality of any given person and create in them a psychological predilection, or attitude, from which they will either only partially escape or  otherwise never escape to any degree at all.

We do not have land whales, and we do not have 300 pound Ants for this reason. No land Mammal that has ever existed has been  as large as the modern blue whale. The physical reality we occupy simply will not allow such things. We do get, however, intelligent people who persist in all manner of ridiculous religious beliefs. Economics dictates sociology.That's why, for example, people from non-tertiary families are 40 times less likely to become tertiary educated professionals than people from tertiary educated families. It's also why Thai Buddhists are vegetarian and Tibetan Buddhists aren't.


Probably the only good case that can be made for Aristocracies is that People born in to wealth handle it, for the largest part, much better than people who obtain vast wealth. History is littered with the wrecks of of poor people who acquired enormous sums of money and were efficiently destroyed by it.