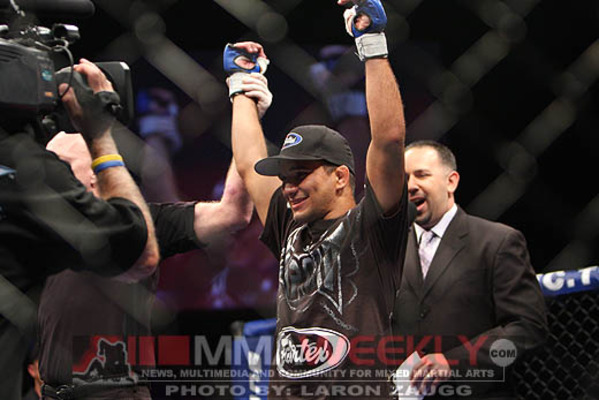 Fighting for a major organization has made Rani Yahya ineligible for regional rankings.

Rani Yahya is a Brazilian featherweight fighter currently signed to the UFC. He is a second degree black belt in Brazilian Jiu Jitsu and trains out of Constrictor Team in Brasilia, Brazil. He has previously fought for Jungle Fight, K-1, Heros and the WEC. During his time with the WEC, Rani would pick up the "Submission of the Night" bonus in three consecutive fights. He holds notable wins over Mark Hominick, Eddie Wineland and Mike Brown. Of his nineteen wins, fifteen have been finishes with all coming by submission.

Rani began competing professionally in 2002 with a quick submission victory. He would not compete again until 2004, but he made a splash when he did by winning a one night, eight man tournament for TNT Vale Tudo. In the tournament, he won each fight with a different type of submission. By 2007, he was an 11-2 pro who had added Hero's 2006 Lightweight Grand Prix semifinalist to his resume.

In mid 2007, Yahya was signed by the WEC and given a tough first opponent in Mark Hominick but he was able to pull off another impressive submission victory, this time in only 79 seconds. This earned him a bantamweight title shot at WEC 30 against Chase Beebe but would lose a decision to the champion. He would lose again when he took on Norifumi "KID" Yamamoto at K-1's annual year end show. This marked the first time that he had lost consecutive fights in his career. Rani took a ten month break from competition but returned at WEC 36. He missed weight for the bout, coming in to the bantamweight contest at 137 pounds. Despite this, he was able to win via submission in the first round and earned the "Submission of the Night" bonus as well. He would earn the same bonus in his next two bouts as well when he submitted Eddie Wineland and John Hosman each in the first round. His final two fights with the WEC were both hard fought losses to Joseph Benavidez and Takeya Mizugaki.

Yahya was brought over to the UFC in early 2011 when the WEC ceased operations. He was supposed to make his UFC debut against Chan Sung Jung, but his opponent was injured and replaced by Mike Brown, who he beat in an upset via unanimous decision. He was next set to fight Dustin Poirer but again his opponent was injured and this time replaced by Chad Mendes. He would fall short, losing by decision. This marked his third loss in four fights, a career low. He was supposed to fight Jonathan Brookins, but when his opponent pulled out due to injury yet again, he was thrown in as a replacement for an injured Pablo Garza against Josh Grispi. Rani was able to submit Grispi midway through the first round. He was able to pick up a decision victory against promotional debuter, Mizuto Hirota and another over Josh Clopton. He fought another UFC debuter, Tom Niinimaki, at The Ultimate Fighter 18 Finale but came up short when he was controlled on the ground for much of the fight on the way to a decision loss. He fought Johnny Bedford in Abu Dhabi at Fight Night 39, but the bout ended in a NC due to an accidental head butt which knocked out Yahya. A rematch has been scheduled for UFC Fight Night 44.