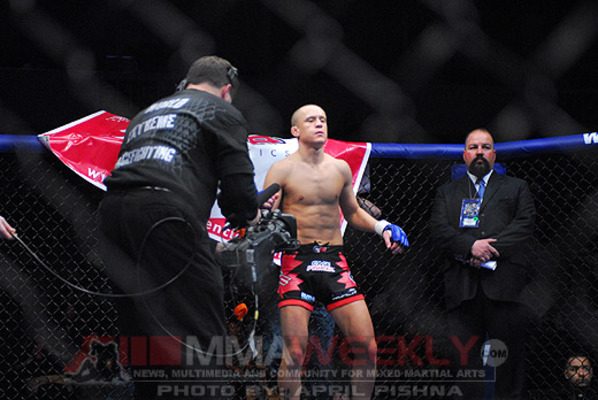 #76
Greatest MMA Striker of All Time

Mark Hominick is ineligible for regional rankings due to inactivity.
Fighters must have at least one completed MMA bout in the past two years to be ranked.

As a teen he attended Ingersoll District Collegiate Institute. He was trained by the late MMA striking coach Shawn Tompkins with Sam Stout at The Adrenaline Training Center in London, Ontario, where he also works as an instructor.

After a while Hominick  joined the WEC. He ended up losing his first two bouts back to back with first round submission losses to Rani Yahya and Josh Grispi at WEC 28 and WEC 32 respectively.He was scheduled to fight Deividas Taurosevičius on October 10, 2009 at WEC 43., but was forced to withdraw due to an injury and was replaced by Javier Vazquez.Hominick was scheduled to face Yves Jabouin on January 10, 2010 at WEC 46,but Jabouin was forced off the card with an injury.[3] Hominick instead faced WEC newcomer Bryan Caraway, winning via first round saubmission.The fight eventually took place on June 20, 2010 at WEC 49. Hominick won via TKO in the second round. They both won a Sherdog award for best round of 2010.Hominick faced Leonard Garcia on September 30, 2010 at WEC 51. He won the fight via split decision.

On October 28, 2010, World Extreme Cagefighting merged with the Ultimate Fighting Championship. As part of the merger, all WEC fighters were transferred to the UFC.Hominick faced former training partner, George Roop on January 22, 2011 at UFC Fight Night 23 in a top contender bout. Hominick stopped Roop via punches in the first round.Hominick faced UFC Featherweight Champion José Aldo on April 30, 2011 at UFC 129, where he lost via unanimous decision in a bout that earned Fight of the Night honors.Hominick faced Chan Sung Jung on December 10, 2011 at UFC 140. Hominick attempted to attack Jung immediately after touching gloves and was met with a counter right, dropping Hominick to the ground. Jung followed up with punches until Hominick went limp and the referee brought an end to the fight, tying one of the fastest KOs in the UFC.Hominick faced Eddie Yagin on April 21, 2012 at UFC 145. Hominick lost the fight via split decision, in a bout that earned both participants Fight of the Night honors.Hominick is expected to face Pablo Garza on November 17, 2012 at UFC 154.

After losing to Pablo Garza at UFC 154 it became uncertain what the future would hold for Hominick. On December 11th 2012, Hominick announced his retirement.