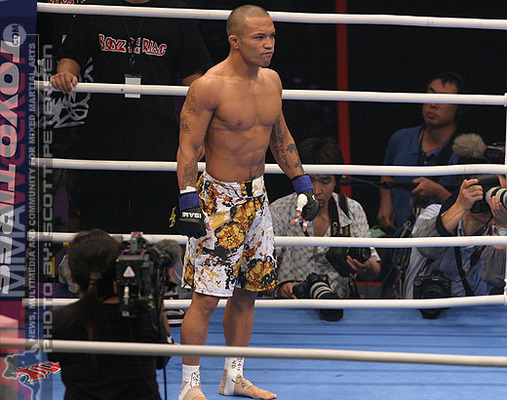 #94
Greatest MMA Striker of All Time

Norifumi Yamamoto is ineligible for regional rankings due to inactivity.
Fighters must have at least one completed MMA bout in the past two years to be ranked.

Beginning his professional career for the famed Shooto organization, Norifumi “Kid” Yamamoto earned a reputation as one of the most explosive Japanese fighters in any weight class after compiling a stellar 17-1 record and defeating Jeff Curran, Royler Gracie, Caol Uno, Genki Sudo, Bibiano Fernandes, and Rani Yahya in that span. With only three of his career wins coming by way of Decision, Yamamoto was one of the top pound-for-pound fighters in the world until back-to-back decision losses to Joe Warren and Masanori Kanehara following a string of severe leg injuries damaged his reputation. In addition to winning the K-1 HERO’s 2005 Middleweight Grand Prix in 2005, Yamamoto also holds the record for the fastest knockout in K-1 history, and one of the fastest knockouts in recorded MMA history, when he defeated Kazuyuki Miyata four seconds into the first round with a flying knee.

After his record win of Miyata, Yamamoto took on Istvan Majoros at K-1 PREMIUM 2006 Dynamite!! on December 31, 2007. Yamamoto subsequently dispatched his opponent via TKO in the very first round.

Yamamoto would go undefeated in 2007, defeating Bibiano Fernandes via unanimous decision at Hero's 10, and then following that up with a another win against Rani Yahya at K-1 PREMIUM 2007 Dynamite!!

2009 would mark the beginning of Yamamoto's decline in MMA. A knee injury that kept Yamamoto on the shelf for over a year, coupled with consecutive losses to Joe Warren at DREAM 9 and Masanori Kanehara at Dynamite!! 2009, showed signs of Yamamoto's deterioration. A win over Federico Lopez via KO at DREAM 14 offered a brief chance that the "Kid" of old had returned, but it would only mark was it currently the last win of Yamamoto's career.

Yamamoto was later signed by the UFC and made his promotional debut at UFC 126. Yamamoto faced Demetrious "Mighty Mouse" Johnson, losing a unanimous decision after a full three rounds of fighting. Yamamoto's luck in the UFC wouldn't improve after that night in Las Vegas. He would drop his next two bouts, a unanimous decision loss to Darren Uyenoyama at UFC on Fox: Velasquez vs. Dos Santos, followed by an armbar defeat to Vaughan Lee at UFC 144.

Yamamoto would take three years away from the sport, instead choosing to coach fighters at his gym, including top Flyweight competitor and title challenger Kyoji Horiguchi.

Yamamoto would make his official return at UFC 184, where he faced off against Roman Salazar. In the second round Yamamoto accidentally poked Salazar in the eye, and with Salazar unable to continue, the bout was declared a No Contest.