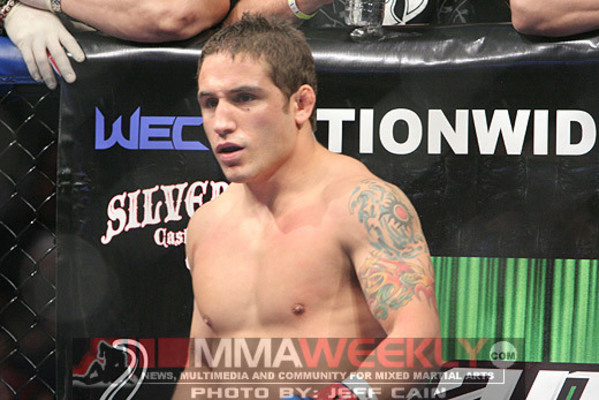 Chad Mendes is ineligible for regional rankings due to inactivity.
Fighters must have at least one completed MMA bout in the past two years to be ranked.

Mendes made his professional debut for PFC in 2008. Money would go 3-0 in that organization before going over to TPC (Tachi Palace Fights). Mendes would continue his unbeaten streak in TPC, going 2-0 and taking his overall record to 5-0. Mendes was garnering a lot of attention and the WEC signed him and he made his debut for the organization in 2010 against Erik Koch. Chad would be successful in his debut, winning a unanimous decision using his wrestling to counter the Koch's striking.

Mendes would win his next three in a row for WEC, compiling his WEC record to 4-0 and his overall record to 9-0, before being brought into the UFC via merger. Money would go 2-0 in the UFC, making his Zuffa record 6-0, earning a title shot at UFC 142 against Champion Jose Aldo. Mendes would lose his bid for the title via KO with one second left in the very first round.

Mendes took the loss and learned from it, as he dispatched his next opponent, Cody McKenzie via KO (body punch) in the first round. Chad Mendes next fight was to be against Hacran Dias at UFC on FX 6 in December until an injury sidelined Dias and he was replaced by Yaotzin Meza. Mendes repeated his performance by knocking out the replacement, UFC newcomer Yaotzin Meza in the first round. He would follow that performance up with another finish by TKO over Darren Elkins at UFX on Fox 7 for his third straight TKO finish. He would continue the streak when he became the first person to TKO Clay Guida at UFC 164 also earning himself Knockout out of the Night as well as becoming another step closer to a rematch with the champion Jose Aldo.

Mendes next faced Nik Lentz, who coming of a 3 fight winning streak was undefeated at Featherweight. Despite sporadic bursts of energy, Money fought a mostly lethargic fight, apparently a result of a sinus infection he was suffering from during the bout. None the less he still scored a dominant Unanimous Decision win extending his winning streak to 5 and his overall record to 16-1.

A rematch for the featherweight title with Aldo has been rescheduled for the main event of UFC 176.