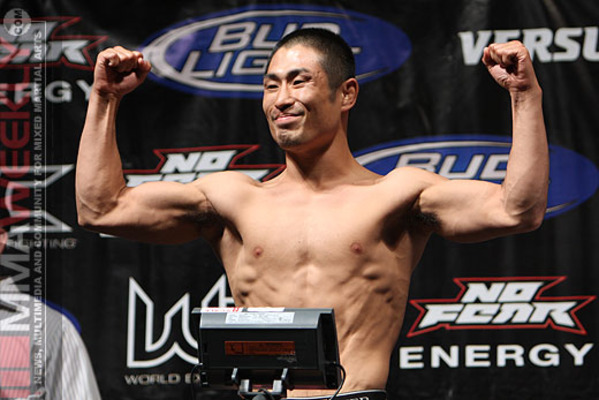 Yoshiro Maeda is a Japanese mixed martial artist who was born Takamatsu, Kagawa, Japan on October 31, 1981. He is currently competing in the bantamweight division. Maeda has competed in notable Japanese promotions such as Pancrase, PRIDE, DREAM and WEC.

Maeda credits watching the Masakatsu Funaki vs. Rickson Gracie fight from C2K Colosseum on TV as one of his inspirations to train to become a mixed martial artist. Maeda began his MMA training at the P’s LAB Osaka.

Before turning into a professional fighter, Maeda participated in 3 amateur MMA fights in which he found no success in, going to a draw in the first 2 fights and then losing the third.

Maeda then was signed with the American organization WEC. During his set of fights in the WEC, Maeda earned a WEC bantamweight title shot against them champion Miguel Torres after defeating Charlie Valencia by TKO. Maeda was unsuccessful in his title shot, but he took Torres to the limit in a gruesome, exciting battle.

After his WEC stint, Maeda returned to compete in Japan where he fought in both DREAM and Sengoku where he obtained a mixed set of results including big wins over seasoned veterans such as Micah Miller, Chase Beebe, Takafumi Otsuka and Masanori Kanehara.

After DREAM and Sengoku closed, Maeda moved on to fight in DEEP.

Maeda was the DEEP Bantamweight Champion, having won the title from Takafumi Otsuka via second round submission at DEEP - 57 Impact. His first title defense came against Tatsumitsu Wada at DEEP - 59 Impact, whom he defeated via third round submission to retain the title. Maeda looked to defend his title again in a rubber match against Daiki Hata at Deep: 62 Impact. Maeda would lose by KO/TKO in the 2nd round and lose his title.

A highlight video featuring footage from the career of Yoshiro Maeda.