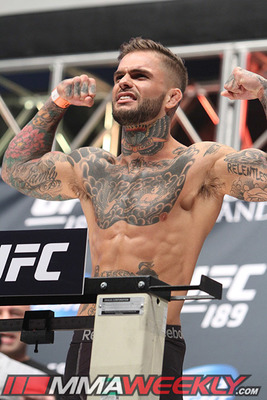 Fighting for a major organization has made Cody Garbrandt ineligible for regional rankings.

Cody Ray Allen Garbrandt is an American professional mixed martial artist, signed to the Ultimate Fighting Championship. He is a former Pinnacle FC fighter and the former UFC bantamweight champion after becoming only the second fighter to defeat Dominick Cruz at UFC 207 handing him his first defeat in almost a decade

Cody Garbrandt began boxing when he was 15 and wrestled some in high school, he won a state championship his freshmen year. He would stop wrestling to pursue his boxing career and would amass a 32-1 record. He began his MMA career in 2009 as an amateur and made his professional MMA debut 2012. Over the next three years, Garbrandt would finish all five of his opponents by way of knockout. Four of those T(KO) finishes would be in the first round.

He quickly drew the attention of the UFC with his finishing capabilities, as he would eventually sign with the organization to make his debut at UFC 182. He would face Ultimate Fighter 14 veteran, Marcus Brimage finishing him in the 3rd by T(KO). He would follow that up with a win over Enrique Briones by Decision, his first time going the distance as a professional. He would pick up his 7th win by TKO in his next UFC fight with a win over Augusto Mendes.