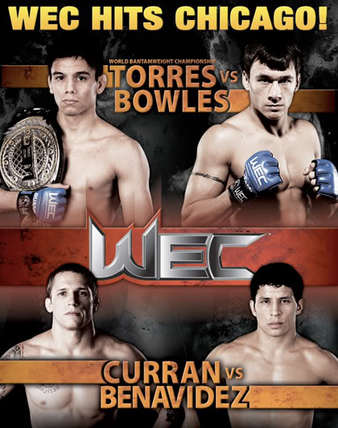 Tapology members can make predictions for upcoming MMA & Boxing fights. WEC 42 is closed for new predictions. 9 total members made predictions on this event, breaking down as follows below.

Leaderboard of the best predictions by member: WEC 42 Leaderboard

Entering the cage as the best pound-for-pound fighter in the WEC, Bantamweight Champion Miguel Torres would not escape from his WEC 42 main event against undefeated contender Brian Bowles with the belt. After wobbling Bowles early into the fight, Torres engaged without putting up a proper defense and was promptly knocked out at the 3:57 mark of the first round. Even though Torres was finished decisively, most fans believed—as with Faber’s first title loss—that Torres could reclaim the belt in short order. As was the case with Faber, Torres would not find his climb back to the championship as easy as others had anticipated.