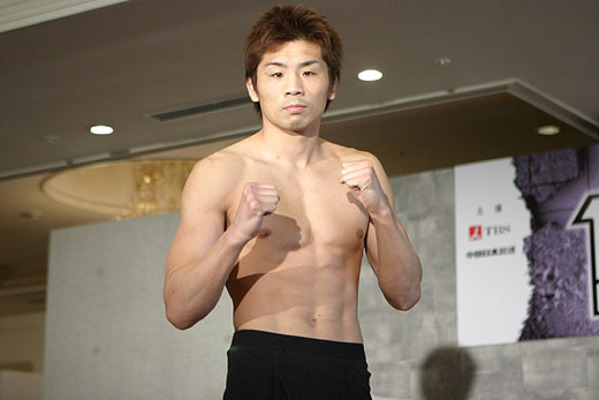 Ryuki Ueyama is ineligible for regional rankings due to inactivity.
Fighters must have at least one completed MMA bout in the past two years to be ranked.

Ryuki Ueyama is a Japanese mixed martial artist who currently competes in the lightweight division. He has fought for organizations such as RINGS, DEEP, Pancrase, Hero's and PRIDE FC.

Ueyama began his mixed martial arts career on 21 September 1998 at Rings - Final Caprture where he lost to Yasuhito Namekawa by unanimous decision. Ueyama picked up his first win less than a month later at a Rings Australia event where he beat Dennis Kefalinos by kneebar in the first round. He was disqualified for eye gouging in his next fight against Lee Hasdell on April 23, 1999 in Japan. After his fight with Hasdell, he went unbeaten for over a year and a half with wins over Willie Peeters, Yasuhito Namekawa and Tim Thomas, with draws against Lloyd Berg, Dave Menne and Kosei Kubota. Ueyama eventually lost on March 20, 2001 against Sokun Koh at Rings - Battle Genesis Vol. 7.

On 9 June 2002, Ueyama entered a DEEP middleweight tournament to crown the first-ever DEEP Middleweight Champion. He defeated Seiki Ryo and Takaharu Murahama before beating Eiji Ishikawa in the final to win the tournament and the title. Ueyama's first tile defense came against Masanori Suda whom he fought to a draw to retain his title. His next denfese came against Ruta Sakurai at DEEP - 17th Impact where he lost to Sakurai in the first round by TKO, also losing his title in the process. Ueyama eventually dropped down to lightweight where he would compee for numerous promotions.