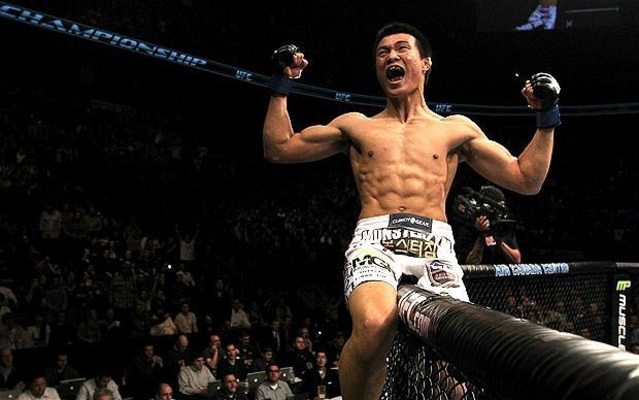 Fighting for a major organization has made Chan Sung Jung ineligible for regional rankings.

Chan Sung Jung made his professional MMA debut in 2007 and reeled off nine straight victories while competing for Pancrase, Deep, and Sengoku. Along the way, he received the nickname “The Korean Zombie” for continually pushing the pace in his fights, even after taking significant damage.

Jung made his U.S. debut when he took on Leonard Garcia on Spike TV during WEC 48. The ensuing battle, loaded with extraordinary, wild punching exchanges, would become known as one of the greatest fights of the past ten years. Although Jung lost a contentious Split Decision after three rounds, his stock rose considerably among fans worldwide, and Dana White was seen proudly sporting a “Korean Zombie” t-shirt at the following UFC weigh-ins.

Jung's stock took considerable damage, however, following his sophomore effort with the WEC promotion against George Roop. Jung's wade-in-head-first "Zombie" strategy ended calamitously when Roop flattened Jung with a head kick in the second round. The highlight reel knockout earned Roop a Knockout of the Night award from the WEC. In March, 2011, Jung became the first fighter in UFC history to submit his opponent with the twister technique lauded by Eddie Bravo. The submission win came in a rematch against Garcia.

He would follow up with an impressive 7 second knockout of Mark Hominick for the Knockout of the Night at UFC 140. His next test came against quickly rising newcomer Dustin Poirier in the Main Event of UFC on Fuel TV 3. Jung would earn himself Fight of the Night and Submission of the Night by finishing Poirier in the fourth round. The Korean Zombie would look to keep his undefeated UFC streak alive when he was scheduled to face Ricardo Lamas at UFC 162 with the winner most likely being the #1 contender.

However due to an Anthony Pettis knee injury Jung would take his place to fight Jose Aldo for the belt at UFC 163. Jung would lose in the fourth round by TKO.

Jung announced in mid-October 2014 his intention to begin his stint for mandatory military service in his home country of South Korea. While Jung did not comment about the future upon his completion, his manager indicated that he would return to mixed martial arts at the end of the two years.

Jung faced Dennis Bermudez on February 4, 2017, at UFC Fight Night 104. He won the fight by knockout in the first round. The win also won Jung his first Performance of the Night bonus award.

Jung was expected to face Frankie Edgar on November 10, 2018 at UFC Fight Night 139. However, it was reported on October 26, 2018 that Edgar was pulled from the bout due to injury and he was replaced by Yair Rodríguez. He lost the fight via knockout in the final second of the fifth round. Both participants received Fight of the Night honors.

Jung faced Renato Moicano on June 22, 2019 at UFC on ESPN+ 12. He won the fight via technical knockout in 58 seconds of the first round. This fight earned him the Performance of the Night award.

Jung was scheduled to face Brian Ortega on December 21, 2019 at UFC on ESPN+ 23. However, Ortega pulled out of the fight in early December citing a knee injury and he was replaced by Frankie Edgar. Jung won the fight via TKO in the first round. The win also earned Jung a Performance of the Night bonus award.