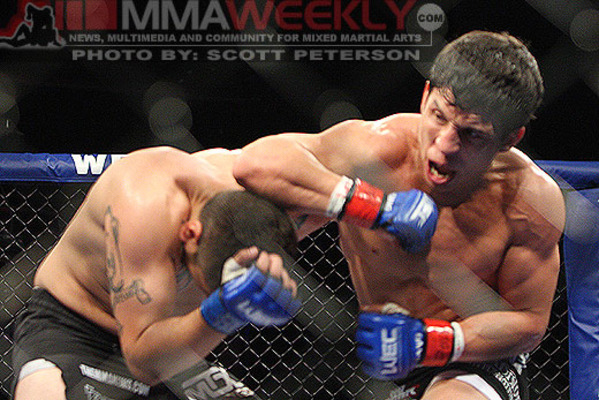 Fighting for a major organization has made Joseph Benavidez ineligible for regional rankings.

Joseph Benavidez, now considered one of the best bantamweights in the world, made his professional debut in 2006, winning his first ten fights, including two in the WEC. After starting his career with nine straight finishes, Benavidez’s first three WEC bouts went the distance, as he defeated notable veteran Jeff Curran but was also defeated for the first time in his career by eventual champion Dominick Cruz. Following the loss to Cruz, Benavidez finished both Rani Yahya and, most impressively, former WEC Bantamweight Champion Miguel Torres, reestablishing himself as one of the premier bantamweights in the world.

Training out of Team Alpha Male in Sacramento, California, the home of former WEC Featherweight Champion Urijah Faber, Benavidez has stepped out of his team leader’s shadow to be recognized as one of the most talented fighters under 155 lbs. The turning point from contender to title challenger was Benavidez’s bout with Torres, where he cut the former champion badly before finishing him off with a tight Guillotine Choke in the second round.

Benavidez would quickly rebound from his title fight loss by beating fellow flyweight tournament fighter, Ian "Uncle Creepy" McCall by unanimous decision at UFC 156 in a fight that was believed to be a #1 contender bout for the flyweight title. However Benavidez would face Darren Uyenoyama at UFC on Fox 7 and would finish him off in the second round by TKO. One win later against Jussier Formiga Benavidez would re-enter the title picture and face-off with Demetrious Johnson in a rematch for the UFC Flyweight Championship, again, Benavidez would lose.

It would take Benavidez 6 years, 10 fights and 9 victories to get his third shot at the UFC Flyweight title in 2020. Deiveson Figueiredo would need 2 rounds to TKO Benavidez but was not eligible to win the vacant belt as he missed weight, later that year Figueiredo and Benavidez would rematch with again the Flyweight strap on the line. This time Figueiredo would submit Benavidez in the first round, making Benavidez one of the fighters with 4 lost titleshots. In 2021 The Beefcake would fight with Askar Askarov on UFC 259 and lose after taking the contest to the judges by unanimous decision.

After losing his bout against Askar Askarov, Joseph Benavidez would announce his retirement at the age of 37. In his 15 year career, Benavidez would compile a record of 28-8 and a UFC record of 15-6. Although Benavidez never won a belt in the UFC, he was one of the most accomplished flyweight fighters in UFC history holding significant wins over Rani Yahya, Miguel Torres, Eddie Wineland, Ian McCall, Jussier Formiga (x2), Tim Elliott, Dustin Ortiz (x2), John Morga, Ali Bagautinov, Henry Cejudo, and Alex Perez. Although Benavidez retired on a three fight losing streak, the hall of famer will be respected by the MMA community for a long time and be a huge part of UFC history.