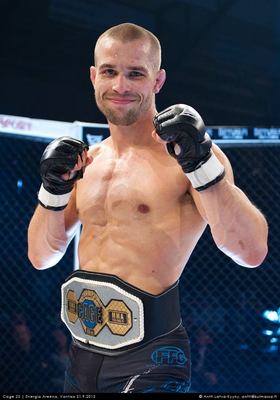 Tom Niinimaki is ineligible for regional rankings due to inactivity.
Fighters must have at least one completed MMA bout in the past two years to be ranked.

Tom Niinimaki is a Finnish featherweight fighter currently signed to the UFC. He currently trains out of FinnFighters MMA in Turku, Finland. He has fought for promotions such as Shooto Europe, Cage Wars and Cage. He has held featherweight titles in Cage and Turku Fight. He holds notable wins over Chase Beebe and Walel Watson. Of his twenty one wins, fifteen have been finishes including eight submissions. He took a two and a half year break from competition in 2006 but since returning, he is on a twelve fight win streak.

Niinimaki began his fighting career in 2002. In his first two years of competition, he would run his record to 9-2 with one of his losses coming to future UFC fighter, Per Eklund. He would begin a four fight skid in 2005 with a draw and three losses in a row. He would take eight months off and return with a victory in 2007. After this win, Tom would take an additional 30 months off from competition. in early 2010, he would return and rattled off five wins in nine months while picking up featherweight titles in Turku Fight and Cage. After another eleven month layoff, he would return with another KO to defend his Cage title. He would fight outside of Europe for the first time in 2012 when he picked up a submission win for Titan FC. He would go on to defend his Cage title three times in ten months including wins over Bellator vet Chase Beebe and UFC vet, Walel Watson.

In late 2013, Tom would be signed by the UFC. He was looking to keep his eleven fight win streak going when he took on Rani Yahya at The Ultimate Fighter 18 Finale. He was able to control much of the fight on the ground and picked up a decision victory.