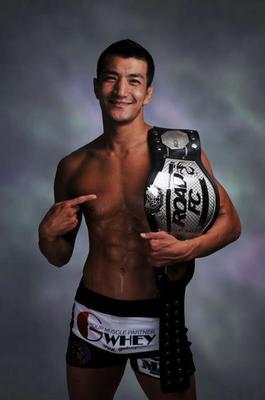 Fighting for a major organization has made Kyung Ho Kang ineligible for regional rankings.

Kyung Ho Kang is a Korean bantamweight fighter currently signed by the UFC. He is a Korean BJJ Association champion. His hero is fellow UFC fighter, Dong Hyun Kim whom Kang now trains with at Busan Team M.A.D. He has also fought in Spirit MC, DEEP, Sengoku, and Road FC where he was the first bantamweight champion. He holds notable victories over Makoto Kamaya and Shoko Sato. Of his twelve professional wins, eleven have been finishes including nine submissions.

Kang started his career as an amateur on season three of "Go! Super Korean" which is Korea's equivalent of The Ultimate Fighter. Kang won the show and earned a contract with Spirit MC where he would make his professional debut and went 3-1. He entered the 2012 Road FC bantamweight tournament. Kang fought Andrew Leone in the opening round but failed to make weight and was docked a 3 point handicap going into the bout. He would lose the fight by decision despite dominating Leone. Kang would get another shot in the tournament however when another fighter bowed out due to injury. He defeated Shoko Sato and Jae Hoon Moon both by submission to meet Leone in the finals. This time, he submitted Leone to become Road FC's first bantamweight champion.

Kang was picked up by the UFC in late 2012 and made his UFC debut against Alex Caceres at UFC on Fuel TV 8. He repeatedly took Caceres down in the first 2 rounds but gassed in the 3rd and allowed Caceres to mount a comeback. Kang would lose by a controversial split decision. However, the bout would be turned into a no contest when Caceres failed a drug test. He would take on Chico Camus at UFC 164, but would again fall to a decision loss. He met Shunichi Shimizu at UFC Fight Night 34 in Singapore and would pick up a submission win with just over a minute left in the last round. There was controversy in the first round when Kang was deducted two points without a warning for illegal elbows.