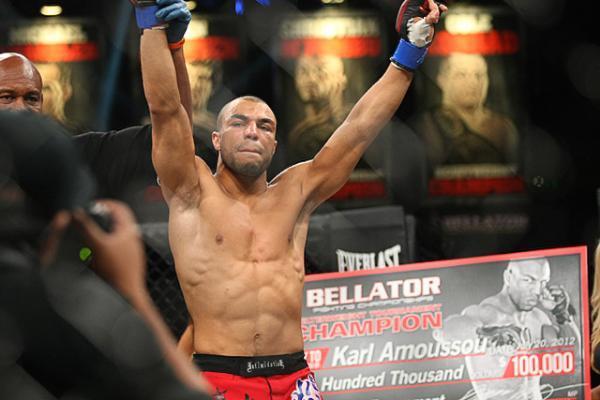 Karl "Psycho" Amoussou was born November 21st, 1985 in Draguignan, France.  Amoussou comes from a famous and prestigious judo family back home in France.  His father was a Judo practitioner and his brother, Bertrand Amoussou, not only earned a bronze in European Judo, but is also a 3 time World Champion in Jujitsu Combat.  Karl is not far from their foot steps, as he has obtained his black belt in Judo as well. Karl Amoussou currently trains with the  "Haute Tension" Team.

Amoussou turn pro in 2006 and has fought in may organizations such as M1, Pancrase and sign eventually signed with Dream and Strikeforce as well. With a 12-3-2 record, he was offered a contract by Bellator Fighting Championships and made his debut on November 21st, 2011.  His debut didn't go quite has planned, as he lost a very close split decision to Sam Alvey.  After defeating Jesus Martinez via TKO, Psycho earned a spot in the WW tourney.  Amoussou realed off three straight victories and won the tournament is exciting fassion, defeating Brian Baker via first round inverted heal hook.

After the fight he called out Champion Ben Askren and voiced his desire to challenge and take the belt away from the current BFC WW king.

On January 24, 2013, Amoussou faced Askren for the Bellator Welterweight Championship at Bellator 86. Amoussou threatened with some submissions, but was on the receiving end of constant ground and pound from Askren. Amoussou lost the fight after the cageside doctor stopped the fight at the conclusion of the 3rd round.

Aswell as competing and training as a professional athlete, Karl is a member of the secret service in France.