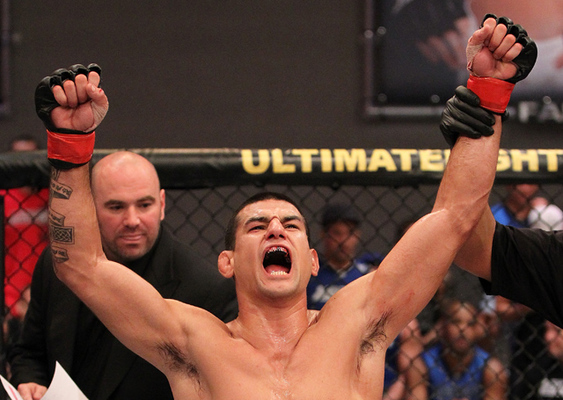 Fighting for a major organization has made Vinc Pichel ineligible for regional rankings.

From Hell ~Thanks mom

Vinc no e needed  Pichel is the guy possibly with the coolest nick name in the fight game.  Viinc "From Hell" Pichel.  He was trying to come up with something for a nickname which is breaking rule number one in fighting.  1- No fighter shall ever appoint their own handle.  1a. They can in some cases reserve the right to veto but must never be the creator, co creator,  or even a creator.  A  creator is further defined as having more than a casual influence..  Fortunately for Vinc he was pondering all this in the presence of the person who had already did him a solid when she left the e off his certificate of live birth.  His mom no doubt being the primary genetic donor of his bad assery said how bout Vinc "From Hell" Pichel. For that we say thank you mom.

Vinc is an American lightweight fighter currently signed to the UFC. He is a purple belt in Brazilian Jui Jitsu and trains out of Big John McCarthy's Ultimate Training Academy and Alliance MMA. He was a semifinalist on The Ultimate Fighter: Live. Of his eight professional wins, seven have been finishes with all coming by T/KO.

Pichel began training in martial arts when a friend of his invited him to test his mettle against real fighters at Big John McCarthy's gym. He began his amateur career shortly after this and would compile a 10-1 record in various promotions. He would decide to turn professional in 2009 and was able to pick up a first round knockout. Over the next two years, he would go on to pick up six more T/KO victories, all of which were in the second round.

In early 2012, Vinc was selected to be apart of the fifteenth season of The Ultimate Fighter which was taking on a live format for the first time. He would be paired up with Cody Pfister in his preliminary fight and would earn his spot in the house with a first round submission win. He would be picked eleventh overall by Team Cruz. He would be matched up with John Cofer in the first elimination fight and would win by arm triangle in the sudden victory round. He would take on Chris Saunders in the quarterfinals and would pick up a majority decision. He was eliminated from the tournament when he dropped a unanimous decision to Al Iaquinta in the semifinals.

Pichel would make his official UFC debut at The Ultimate Fighter 16 Finale against Russian prospect, Rustam Khabilov. He would lose for the first time as a professional when he was finished by TKO due to a suplex and punches in the first round. He next took on Garett Whiteley at UFC Fight Night 35 and was able to walk away with a unanimous decision win. Pichel dropped a dec loss to Mark Madsen.