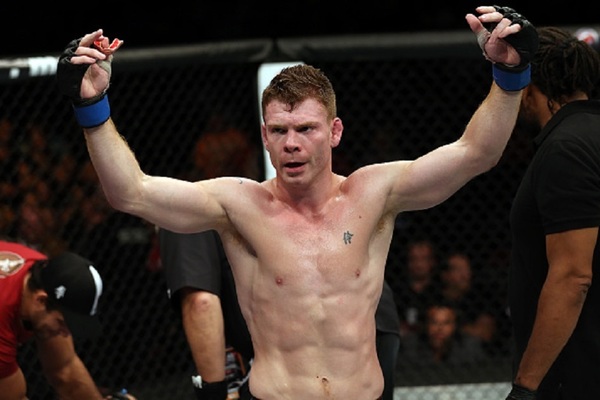 Paul Felder is ineligible for regional rankings due to inactivity.
Fighters must have at least one completed MMA bout in the past two years to be ranked.

Paul Felder began training in Martial Arts when he was 12 with training in Karate and Tae Kwon Do. He grew up in tough Irish-Catholic neighborhood in south Philadelphia earning him the nickname The Irish Dragon.  He holds notable wins over Julian Lane and Marc Stevens. The win over Stevens earned him the Cage Fury Fighting Championship's lightweight title which he would successfully defend once before heading to the UFC.

He would win his UFC debut by Unanimous Decision over Jason Saggo keeping his undefeated professional record intact.  After his win over Saggo, Felder would then go on to score a major upset victory over Danny Castillo at UFC 182 with a first round KO.  This upset victory over Castillo started to direct attention towards Felder, with some considering him to be a future contender in the Lightweight division down the road.

Consequently, Felder was to be given one of his first big tests at UFC on FOX 15; where he was scheduled to fight Jim Miller.  Unfortunately, Felder would have to pull out of this bout with Miller due to a knee injury and would get replaced by Beneil Dariush.   After recovering from his knee injury, Felder would get another opportunity to face a high level opponent at 155 at UFC on FOX 16; in which, he would replace an injured Miles Jury to face off against top ten Lightweight Edson Barboza.  Felder and Barboza would put on an exciting, closely contested three round fight that would earn Fight Of The Night honors; but would ultimately result in a unanimous decision loss for Felder, the first of his career.  Even in defeat, however,  Felder had elevated his name after his fight against Barboza; confirming that he could compete with the best in the UFC's Lightweight Division.