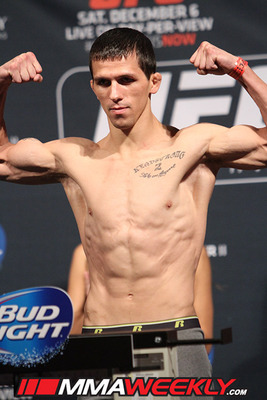 Fighting for a major organization has made Alex White ineligible for regional rankings.

Alex White is a mixed martial artist who has had a tough life. When he was only four years old he accidentally drank gasoline and the doctors didn't give him much of a chance to live through the night. White would survive the ordeal but he had burnt his vocal cords, damaged his hearing and had a minor speech impediment. After that he had a tough childhood where he was bullied and in and out of homelessness. He was working at a McDonald's when one day he decided to go into the gym that was right nearby where he worked. He said he had no money and offered to clean the gym or do whatever he had to to start training.

White would start out with boxing when he entered a Ringside tournament beating 5 guys in 5 days. He would also begin his MMA career and since then he went 15-0 as an amateur in MMA and 9-0 as a pro. He would also compile a 12-0 record as an amateur boxer as well as 4-0 record in kickboxing.

In March of 2014 White would sign with the UFC and make his debut on short notice as a replacement for Mike Brown. He would debut in spectacular fashion as he finished Estevan Payan by TKO to earn his first victory as well as a Performance of the Night bonus. He looks to pick up his second win in another short notice fight as he replaces Jim Alers to face Lucas Martinsat UFC Fight Night 45.

At UFC Fight Night 45, White was defeated by Martins via KO in the third round.

White was then scheduled to fight "Cassius" Clay Collard on December 6, 2014 at UFC 181. White lost a unanimous decision bringing his UFC record to 1-2.