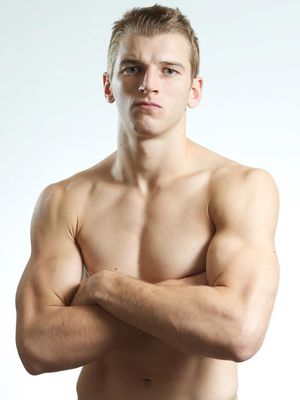 Fighting for a major organization has made Dan Hooker ineligible for regional rankings.

Daniel Hooker is a representative of Strike Force, the academy which has produced some of the most elite competitors in the current generation of New Zealand fighters. A native of Auckland, Hooker was introduced to martial arts by a friend who was actively competing at the time. The young Kiwi soon discovered a natural talent for combat sports, and took his first professional fight shortly after his 19th birthday. Since then, Hooker has fought increasingly challenging opponents in both New Zealand and Australia, and is now regarded as one of New Zealand’s top lightweight prospects. With teammates like Sam Brown, Pat Crawley, Gareth Ealey, and Rod MacSwain having represented their team and their country in the Legend Ring, Hooker is now proud to follow in their footsteps.

Dan Hooker is also a pro kickboxer with a 9-1-3 record, winning the King In The Ring Middleweight Kickboxing Championship and WKBF X-Rules Welterweight Championship.

Hooker also has a 3-2 submission grappling record. On the 18th of October 2009, he took part in the ICNZ Contender Series 1 No Gi Submission Wrestling Tournament. He beat Thomas Kwok and Bass Khou by guillotine choke and lost to Pumau Campbell on points. He also competed in the New Zealand 2011 No Gi Nationals, in the Advanced under 77 kg / 170 lbs division, he beat Paul Faavaoga in the first round, and lost to LJ Stevenson in the second round.

Hooker has been teaching MMA since 2008, spending time as a coach at City Kickboxing gym in Auckland. In mid 2018 Hooker opened his own gym that included a full-sized boxing ring and an octagon. He is currently training with Israel Adesanya under headcoach Eugene Bareman at City Kickboxing.

Hooker is 9 wins and 4 losses into his UFC career. He fights for the promotion since 2014. The Hangman is currently coming off a unanimous decision win against Al Iaquinta at UFC 243.