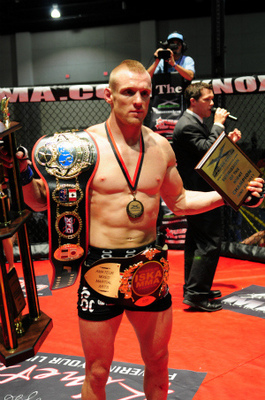 Fighting for a major organization has made Scott Holtzman ineligible for regional rankings.

Scott Holtzman is an American Mixed Martial Artist fighting out of Knoxville, Tennessee. He began MMA career as an amateur in 2010,  finishing all 4 of his opponents. 3 of those wins were part of a 16-man Grand Prix Tournament for the 3FC promotion. He did so well in the tournament that surging  regional promotion XFC took notice, signing Holtzman. He made his pro debut in 2012, choking out Brandon Demastes in the first round. He won his next 2 fights against Matt Metts and Chris Coggins. In his first real test as a pro, he took a decision win over fellow undefeated prospect Jason Hicks, which earned him a lightweight title shot against then champion Nick Newell. The fight would ultimately fall through the cracks when Newell refused to sign the contract, and left the promotion to pursue other opportunities. Hotlzman still got his title shot, against tough veteran John Mahlow for the vacant strap. Mahlow couldn't really keep up with Hotlzmans power and athleticism, getting knocked out in the second round.

Holtzman then faced the veteran Roger Carroll at XFC 26: Night of Champions 3 and successfully defended his lightweight title by dominating the fight on his way to a Unanimous Decision victory.