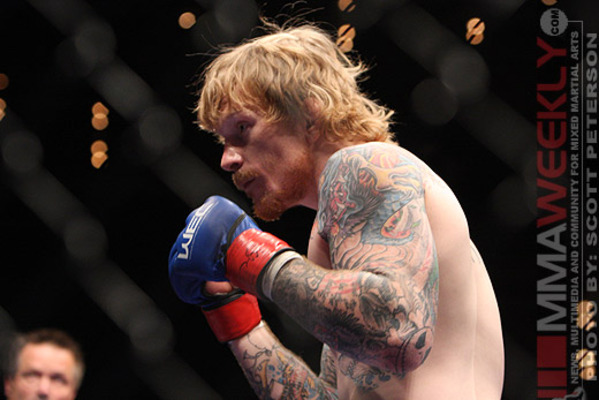 Bart Palaszewski is ineligible for regional rankings due to inactivity.
Fighters must have at least one completed MMA bout in the past two years to be ranked.

Originally a lightweight, Bart 'Bartimus' Palaszewski is a ten year MMA veteran who has fought across the IFL, WEC, and now competes as a featherweight in the UFC. Bart struggled early in his career, losing his first four professional fights. He would then win his next eight fights, finishing six of his eight opponents. Prior to signing with the IFL, Palaszewski possessed a 21-7 record, including fights against notables such as Clay Guida and Gesias 'JZ' Cavalcante.

He would win his first five fights in the IFL, including a decision win over Ivan Menjivar. He would then lose a split decision to Chris Horodecki, but then went on three fight win streak. After losing by submission to Deividas Taurosevicias, he would once again lose to Horodecki, and then drop another fight to Jim Miller. After defeating Jeff Cox, he would then sign with the WEC.

'Bartimus' scored a 'Knockout of the Night' performance against Alex Karalexis at WEC 37, but would lose his next two to Ricardo Lamas and Anthony Njokuani. He then would go on a four fight win streak, where he also became the first man to defeat flashy striker Anthony Pettis, by split decision. After losing to Kamal Shalorus at WEC 53, Palaszewski would make the drop to featherweight.

Palaszewski impressed in his debut as a featherweight, knocking out veteran Tyson Griffin early at UFC 137. After dropping Griffin, he swarmed with numerous quick, straight punches on the feet, eventually knocking Griffin unconscious. He lost a fight to former Sengoku champ Hatsu Hioki at UFC 144, but survived multiple submission attempts, showing how tough he can be to finish. He would however drop his next two fights, a Fight of the Night decision to Diego Nunes and then he lost by submission to Cole Miller. Following the three fight skid he was cut from the promotion.

Bart Palaszewski has been around the block, despite the fact that he is not even 30 years old. The Team Curran fighter is regarded as a knockout artist with solid submission abilites, and has numerous ways to end a bout.

On February 21st 2014 Palaszewski announced on twitter that he was officially retiring from the sport.