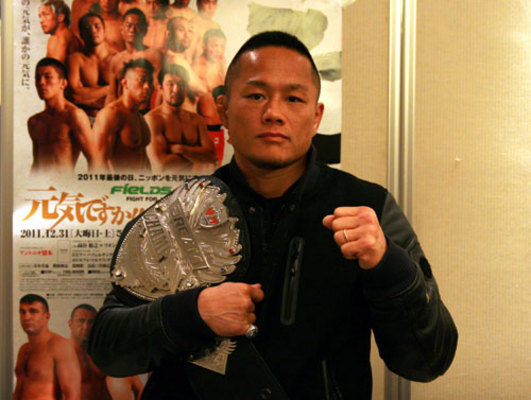 Hiroyuki Takaya is ineligible for regional rankings due to inactivity.
Fighters must have at least one completed MMA bout in the past two years to be ranked.

Hiroyuki Takaya is a Japanese mixed martial artist born on June 10, 1977 in Chiba, Narashino, Jappan. Before becoming a professional fighter, Takaya competed in the Freshman Amateur Shooto East Tournament where he successfully advanced to the second round after he defeated his first opponent by unanimous decision. However Takaya was defeated in the second round by unanimous decision.

Despite not winning the tournament,Takaya still went on to become a professional mixed martial artist making his professional debut against Hayato Usui on February 6, 2003. Takaya went on to win his MMA debut by TKO in 2:06 of the second round. Takaya then went on a 3 fight win streak before it came to a stop in a draw against Joao Roque.

He is currently competing in DREAM, where he is the DREAM Featherweight Champion. He has previously fought in the Shooto, K-1 Hero's, Cage Force and WEC. He was the runner up of the DREAM 2009 Featherweight Grand Prix,losing to Bibiano Fernandes by split decision. He avenged this loss at Dynamite!! 2010 to become the new champion. His main style of fighting is considered to be street fighting due to his experience fighting on the street hence he is known as the "Streetfight Bancho".

Takaya made his professional debut in the Shooto organization in a fight against Hayate Usul in 2003. After a 9-4-1 record in Shooto, Hero's, and Cage Force including bouts against top mixed martial artists like Strikeforce Lightweight Champion Gilbert Melendez, Genki Sudo, and former Hero's Middleweight Champion Gesias Cavalcante. Takaya made his American debut at WEC 22 where he fought, and lost to, Leonard Garcia by KO. Takaya then lost to Cub Swanson at WEC 37, losing by unanimous decision.

Takaya was a participant in the DREAM Featherweight Grand Prix where he beat Jong Won Kim, Yoshiro Maeda and Hideo Tokoro en route to the finals, before losing to Bibiano Fernandes via split decision to become the runner up of the tournament. Takaya then faced former DREAM Lightweight Champion Joachim Hansen, knocking Hansen out in the first round. On December 31, 2010, Takaya rematched and defeated Bibiano Fernandes via unanimous decision and became the DREAM Featherweight Champion. He then defended his title first against Kazuyuki Miyata and then against Takeshi Inoue. On December 31, 2012 at DREAM 18, Takaya fought Georgi Karakhanyan in a non-title bout where Takaya lost via split decision.

Takaya would find 2013 to be a winless year, as he lost to Daniel Romero at Vale Tudo Japan: VTJ 2nd on June 22, 2013 via TKO. He then fought to a majority draw against Toby Imada at Shoot Boxing: Ground Zero Tokyo on November 16, 2013.

Takaya would then run his winning streak to three fights when he beat Guy Delumeau via knockout at Pancrase 266 on April 26, 2015.