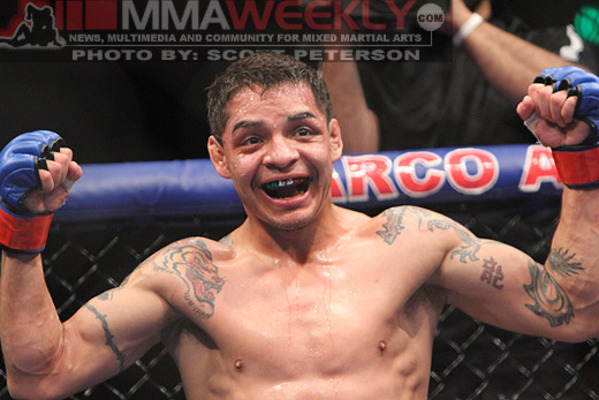 Leonard Garcia is ineligible for regional rankings due to inactivity.
Fighters must have at least one completed MMA bout in the past two years to be ranked.

For mixed martial artist Leonard Garcia, putting on a show for the fans in attendance is the only thing that matters. Garcia can virtually always be counted on to go to war, even when he might otherwise utilize his impressive skill set en route to a tactical decision victory. This attitude has not only made him a fan favorite, it has also resulted in his participation in some of the most memorable in-cage battles in modern MMA history.

Garcia’s big break came in 2007, when he made his UFC debut against Roger Huerta at 155 lbs., fighting above his natural weight. Although Huerta dominated most of the fight both standing and on the ground, Garcia refused to give in, and landed plenty of hard shots of his own. By its conclusion, Garcia-Huerta was considered one of the very best fights of the year. It was also clear that Garcia would be better served fighting at 145 lbs., and he moved to the WEC in 2008. He challenged for the WEC featherweight title in 2009 and has remained a top contender ever since.

In April of 2010 on the Spike TV-televised portion of the WEC’s first Pay Per View event, Garcia won a close Split Decision over WEC newcomer “The Korean Zombie” Chan Sung Jung in what has been hailed as one of the best fights of the last decade. In perhaps the greatest of the raging barnburners that have come to define Garcia’s career, he and “The Korean Zombie” traded monster haymakers nonstop for 15 minutes. Within days, UFC President Dana White could be seen sporting a “Korean Zombie” t-shirt in testament to the instant classic – but it was the “Bad Boy,” Leonard Garcia, who won it. He lost a pair of competitive decision to Matt Grice and Nam Phan before meeting Max Holloway at UFC 155. In a very close, back and forth war, Garcia dropped another split decision. He would lose another decision to Cody McKenzie and be cut from the UFC.

Garcia would sign on with Legacy and rattle off 3 straight wins with finishes over Rey Trujillo, Nick Gonzalez, and Kevin Aguilar. With the win over Aguilar he would also win the 145 pound title. He is set to make his first defense against Damon Jackson.