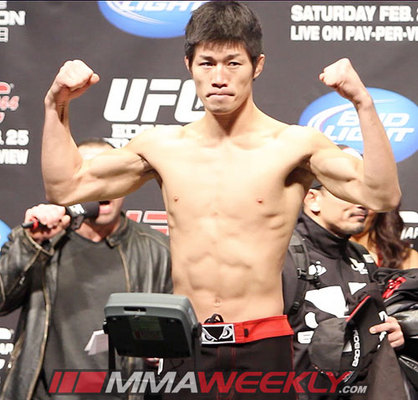 Hatsu Hioki is ineligible for regional rankings due to inactivity.
Fighters must have at least one completed MMA bout in the past two years to be ranked.

Hatsu Hioki is a Japanese MMA fighter born on July 18, 1983 in Nagoya, Aichi, Japan. Hioki has spent his career competing in the 145 lbs featherweight division where he has had found much success earning various titles such as the Shooto Lightweight Title, the Canadian TKO Featherweight Title and Sengoku Featherweight Title. Hioki resides in Tokyo, Japan and fights out of the ALIVE Shooto & Jiu-Jitsu Academy and he occasionally has trained out of the Tri-Star Gym.

Due to his success, Hioki has been considered not only one of the top Japanese featherweights, but one of the top featherweights in the world. Hioki earned his recognition by holding wins over such names as Mark Homonick twice, Jeff Curran, Rumina Sato, Masanori Kanehara, “Lion” Takeshi Inoue, Marlon Sandro, George Roop and Bart Palaszweski.

Hioki’s very well known for his grappling skills as he’s a black belt in Brazilian Jiu-Jitsu. His grappling skills on the ground are usually used by Hioki to smoothly pass and transition into different positions. Hioki regularly goes for triangle chokes which is his favorite move which he’s used to rack up wins by submission and to hold his opponent down for him to be able to ground & pound them.

Hioki started his career in the Shooto organization where he went 8-1-1 with his only loss being to Hiroyuki Takaya. Hioki then fought for his first MMA title in the TKO Major League MMA promotion where he defeated Mark Hominick by submission. Hioki would fight Hominick again a few months later to defend the title, he won again, this time by majority decision.

Hioki would continue fighting in TKO and Shooto until March 20, 2009 when he started fighting for Sengoku. Hioki would enter the featherweight Grand Prix. He won his first 2 fights easily and met Masanori Kanehara in the semifinals. Hioki would win a decision but sustained an injury and couldn't continue on with the tournament.

Hioki would return again to Shooto to fight Takeshi Inoue for the Featherweight title. Hioki would win by split decision. He later vacated the title and returned to Sengoku.

After winning his return fight he was scheduled to fight standout Marlon Sandro for the Featherweight title. Hioki used his superior reach and movement to avoid Sandro's hard strikes and would win a decision. He would later vacate the title.

The same day that Hioki vacated the Sengoku title it was announced that he signed a multi fight deal with the UFC. In his first fight he took on George Roop. Hioki would come out on top in a tightly contested affair. Next he fought veteran Bart Palaszewski, in this fight Hioki exhibited his great takedowns and his dangerous ground game as he dominantly controlled Bart. Hioki was offered a title fight next but he turned it down citing that he didnt feel he was ready for one yet. He instead fought Ricardo Lamas. Hioki repeatedly took Lamas down but kept getting stuck in guillotines and eventually lost by decision.

Hioki was expected to welcome Clay Guida to the Featherweight division at UFC on FOX 6: Johnson vs. Dodson. Hioki lost a controversial split decision to Guida after outstriking Guida and constantly attempting submissions from his back. He would also drop a decision to Darren Elkins in his next fight before bouncing back with a decision win over Ivan Menjivar. He will look to make it 2 straight when he fights Charles Oliveira at UFC Fight Night 43.